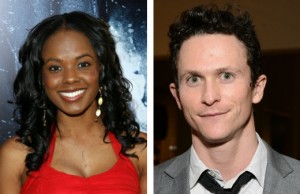 Syfy has announced several additions to the cast of High Moon, a 90-minute pilot created by Hannibal‘s Bryan Fuller that tells the story of Earth establishing colonies on the Moon to mine resources. Included are Jonathan Tucker (Parenthood) as Stanslav “Stan” Stavin, a handsome, complex, and outgoing miner; Dana Davis (10 Things I Hate About You) as Yama Winehart, the first (and last) baby born on the Moon; Peter Macon (Animated Tales of the World) as General Gale Wineheart, Yama’s father who is intent on getting to the bottom of the moon explosion; and Charity Wakefield (Casualty 1907) as Eve St. John-Smythe, CEO of the world’s most profitable corporation. The first three roles are said to be recurring, while Wakefield will only be guest starring in the pilot, which begins production on August 26th in Vancouver. The project is based on the novel “The Lotus Caves” by John Christopher and will star Chris Diamantopoulos (The Office) and Jake Sandvig (Easy A).

-ABC Family will be running the five episodes of reality series The Vineyard on Monday, August 26th from 6:00 p.m. until 11:00 p.m. The series focuses on locals and “wash-ashores” on Martha’s Vineyard and the relationship drama that follows them.

-Do you like FX? Want to know if you will have FXX come September 2nd, the day the network will officially launch? You can check out GetFXX.com to see if you’ll be able to watch It’s Always Sunny in Philadelphia, The League, and Totally Biased with W. Kamau Bell live. The network will reportedly be available in 72 million homes upon its debut.

–Oprah’s Lifeclass has officially won the Primetime Emmy for Creative Achievement in Interactive Media – Social TV Experience, a category voted on by a jury of professionals in the relevant peer group. The series finds millions of students all over the world interacting with Winfrey on-air, online, and via social media as they listen to an expert meant to help them live more fulfilling lives. OWN has also doubled the episode order for Tyler Perry’s Love Thy Neighbor, bringing the comedy up to 52 episodes for its first season, and while ordering four more installments of Tyler Perry’s The Haves and the Have Nots and moving Tyler Perry’s For Better or Worse over from TBS beginning Wednesday, September 18th at 9:00.

-ABC Family has ordered three comedy pilots: Mystery Girls, starring Tori Spelling as a former TV star forced to solve crimes with her mystery TV series co-star; Work Mom, which follows digital marketer Heather as she gets a promotion and hires her mother; and Young & Hungry, about a tech entrepreneur who hires a food blogger as his personal chef. A decision about whether any of these will be picked up to series and join the network’s comedy roster, which includes Baby Daddy and Melissa & Joey, will come early next year.

-Kendrick Lamar leads the way with 14 nominations at the BET Hip Hop Awards, which will air October 15th and be hosted by Snoop Dogg. Other major nominees, which you can see here, include J. Cole, Drake, and Wale.

-Comedian Dave Attell has landed a weekly late-night stand-up series. Yet to be titled, the eight-episode first season will feature comedians performing uncensored and unfiltered sets, with new faces mixed in with familiar favorites. He previously had travelogue Insomniac with Dave Attell on the network, which ran from 2001-2004 and inspired several one-hour specials during its run.

-History has greenlit production on a scripted miniseries based on famed magician Harry Houdini. Starring Adrien Brody and Kristen Connolly, Houdini follows the man as he “finds fame, engages in espionage, battles spiritualists and encounters the greatest names of the era, from U.S. presidents to Sir Arthur Conan Doyle and Grigori Rasputin.”

-Upcoming ABC Family drama Ravenswood will be given a special new promo during the summer finale of Pretty Little Liars, airing Tuesday. Also, the network will initiate the #RavenswoodReveal challenge, as star Tyler Blackburn will tweet a portion of a photo that holds clues to the series. Once it reaches 1022 retweets, in honors of the show’s October premiere date, one of his four co-stars (Nicole Gale Anderson, Brett Dier, Britne Oldford, and Merritt Patterson) will tweet another part of the photo, looking for 1022 retweets, and so on.

-Syfy has put a new reality series from the producers of Face Off into development. Camera Ready will put ten aspiring costume designers through challenges in creating wardrobe for television, film, and music videos. They’ll be evaluated by Oscar-winning costume designers, cutting-edge directors, and avant-garde fashionistas, with the winner taking home $100,000.

-On September 7th at 9:00, Animal Planet will be holding a countdown of the Top 20 Kitten Moments, with regular interruptions scheduled for glimpses at the Animal Planet L!VE’s Kitten Cam. If you can’t wait, the network has set up an exclusive live stream of the second annual Walker Art Center Internet Cat Video Film Festival, set to begin August 28th at 8:30 p.m. on AnimalPlanet.com/CatVidFest. A butter sculpture of a cat will also be revealed during the hour.

-The CW has set its summer finale dates, as well as ordered one-hour special Colin & Brad: Two Man Group (with Colin Mochrie and Brad Sherwood) and a one-hour Arrow recap special titled Year One. The schedule is as follows: