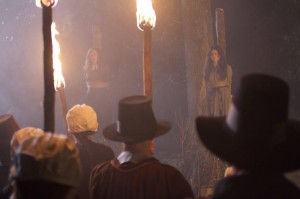 This week on TVHackr, we talked about the latest in ABC comedy development, The CW having confidence in their new fall dramas, and NBC picking up its first freshman series, while the internet touched on flawed female protagonists, TV lies, and keeping up a TV home.

Bean, Longoria and Walsh team up for Indie Drama, Any Day
Sean Bean, Eva Longoria, and Kate Walsh will be starring in upcoming indie movie Any Day, where Bean’s character, an ex-fighter, undergoes a transformation due to spending time with his nephew.

Extant: Halle Berry to Star in CBS Drama
The Academy Award winner has signed on to play an astronaut who returns to Earth following a year-long space mission in the next CBS summer drama.

The Simpsons Renewed for Season 26 by FOX
FOX has renewed The Simpsons for a 26th season, which is set to begin in the fall of 2014. The show currently airs Sundays at 8:00.

The Blacklist Picked Up for a Full Season by NBC
NBC has given out its first back order of the season and picked up The Blacklist, which stars James Spader, for a full 22-episode season.

Harry Connick Jr. Comedy Pilot Finds Home at Fox
The American Idol judge and recording artist will play a singer attempting to strengthen his relationship with his daughter in the comedy pilot.

The White Queen Episode 8 Recap: You Will Never See Me Crowned
When Edward falls ill, Elizabeth finds herself struggling to survive, while Margaret and Anne take steps to secure their futures.

Grey’s Anatomy 10.03 Review: “Everybody’s Crying Mercy”
The doctors throw a benefit gala for the hospital, while the interns are forced to become surgery sharks and Bailey gets stuck between two patients.

Bob’s Burgers Recap: Congratulations, You’re a Robot
It’s Halloween and while the Belcher children get stuck in a fort, Bob and Linda continue working on the group costume: a Chinese dragon with a napkin box for a head.

Betrayal 1.03 Preview: Connie Fears for Her Life
On the next episode of Betrayal, Connie fears for her life after getting T.J. arrested, Sara attempts to resist the pull of her affair, and Drew squares off with Jack.

ABC Developing Sofia Vergara Autobiographical Comedy
ABC has put a comedy in development based on the relationship between Modern Family star Sofia Vergara and her 21-year-old son.

Castle Review: “Need To Know”
While Castle insinuates himself into a murder investigation led by Ryan and Esposito, Beckett becomes conflicted at the ethical sacrifices she’s expected to make as a part of her new job.

TNT Renews Cold Justice for Second Season
TNT has given docu-drama Cold Justice, which follows a former prosecutor and a former crime scene investigator as they solve small town murders, a second season.

Murder Police Canceled by FOX Before It Airs
FOX has decided to pull the plug on animated comedy Murder Police before it airs due to dissatisfaction with the creative direction of the show.

Fox Orders Unscripted Celeb-Driven Comedy from Steve Carell
FOX has ordered Slide Show, an unscripted comedy that pits celebrities and comedians against one another in a series of songs, dances, and sketches.

HIMYM 9.04 Review – The Broken Code
As Barney works through his anger at Ted on How I Met Your Mother, Marshall Skypes in and Lily realizes she’s Robin’s only girlfriend.

Kate Walsh Joins the Cast of FX’s Fargo
The Private Practice star has joined FX’s miniseries adaptation of the 1996 Coen brother movie, where she’ll be playing a trophy wife and mother of twin boys.

Bert Kreischer to feature in self-inspired NBC Comedy
Comedian Bert Kreischer has a comedy in development at NBC, to be written by The Goode Family‘s Franklin Hardy and Shane Kosakowski, based on his life.

Revenge 3.03 Preview: Conrad and Emily Confront Their Sins
On the next episode of Revenge, both Conrad and Emily confront the sins that got them to where they are, while Nolan’s housewarming party features a surprise guest.

The Tomorrow People Preview: Watch the New York Comic-Con Sizzle Reel Here
The CW has released a sizzle reel featuring footage from the first eight episodes of The Tomorrow People, which aired its series premiere this past Wednesday.

The Fosters Renewed for Season 2 by ABC Family
Ahead of the show’s return in January, ABC Family has renewed The Fosters for a second season.

GLAAD: Gay depictions slip on network TV (Entertainment Weekly)
According to a study by GLAAD, FOX is the most inclusive broadcast network, while HBO has the most LGBT characters with 11 and 50% of ABC Family’s programming hours contain LGBT images.

The real cost of upkeep for a TV show home (Marketplace)
Marketplace took a look at the prices for upkeeping homes featured on Downton Abbey, Modern Family, and Big Love.

TV’s Strongest Female Characters Share One Stupid Flaw (TIME)
TIME writer Eliana Dockterman that while female protagonists are stronger and more capable than ever, they share one common flaw: men.