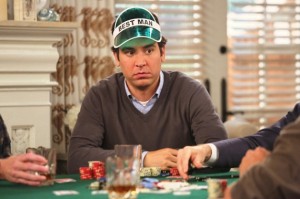 This was a fantastic episode of HIMYM!  Reminded me why I love the characters and felt very throwback-esque to the earlier times, to me.  Entitled “The Broken Code,” the episode picked up directly after last week, with Barney’s reveal that he saw Robin and Ted at the carousel…holding hands.

In true Barney Stinson form…he brushes the incident off, despite Ted’s concern that he’s mad, and the two – also in true Barney Stinson form – cry over a the $600 bottle of scotch.  It seems all is forgiven, until Barney gives Ted more and more outrageous best-man duties and Ted stumbles in on the groom-to-be playing poker with Ranjeet, and returning guest stars Tim Gunn and William Zabka, the latter of which is apparently the new best man.

Ted and Barney then enlist Marshall’s help (he’s skyping in via-iPad on the “Marsh pillow”) in deciding if Ted did or did not actually break the Bro Code.  Ultimately, it comes out that Barney is mad at himself rather than Ted, upset that he wasn’t there for Robin when she needed him, and Ted admits that he will always have some sort of feelings for Robin.

While the boys were working out the details of the Bro Code, Lily spent her time trying to find Robin a new friend after her bachelorette party crashed and burned because, well, Robin has no female friends.  After debating the reasons why Robin hates women so much, she ends up finding an apparent friend and fellow sports fan in a woman at the hotel bar…but Lily can’t handle it, and sends her running, to Robin’s happiness.  After all, Lily is the only woman Robin needs.

Like I said, this episode reminded me why I like these characters so much.  There were no real gimicks in the episode, just the characters being who they are, and it ended on a fantastic cliffhanger with Zabka seemingly out to win back the best-man cap from Ted.

I’m pleased that this episode saw the (hopeful) end of the Ted-Robin romance idea.  As I mentioned last week, I would rather not see this be an issue dragged out for long, especially considering the contensed timeline of the episode and the fact that Ted must meet the mother at some point…relatively soon.

I loved how the season seems to be bringing in all kinds of details from the past (“E-Lawyered!”), and will be showing the return of guest stars we have all loved.  Tim Gunn plays a…mean, if you know what I mean, card shark.

What did you think of “The Broken Code”?  Hit the comments!