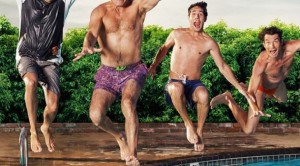 CBS has canceled ensemble comedy We Are Men after two episodes, with current Monday anchor 2 Broke Girls moving back to its old 8:30 time slot beginning next week. Reruns of The Big Bang Theory will keep Girls‘ current 9:00 slot warm for a few weeks until the fourth season of Mike & Molly premieres November 4th at 9:00. Men is the third cancellation of the season following the demise of Lucky 7 and Murder Police, the first major move CBS has made toward revamping its sagging Monday comedy bloc.

Granted, the lineup was already falling before Men debuted late last month, but something had to be done to ensure the security of 2 Broke Girls, buckling under the weight of being the night’s centerpiece, and Mom, which has shown good retention behind Girls and keeps CBS in the good graces of creator Chuck Lorre. Critically reviled We Are Men was the most expendable part of the lineup and since Mike & Molly has a 22-episode order this season, its stable ratings could potentially help the night overall, though there’s no guarantee that Mom will hold as much of its audience as it has been holding of 2 Broke Girls.

CBS is in an interesting position in terms of their comedy slate, as How I Met Your Mother is ending this season and Two and a Half Men is on its last legs, so they need to cultivate at least a few newer comedies in hopes of positioning them for a long run. With 2 Broke Girls already sold into syndication, it couldn’t afford to be dragged down any further and have its value as a property damaged, but how much can it recover behind How I Met Your Mother?

Will you miss We Are Men? Should CBS have waited to see where it stabilized or did they have to make a move to save their night? Is Mike & Molly the answer to stopping the bleeding on Mondays and helping both 2 Broke Girls and Mom?