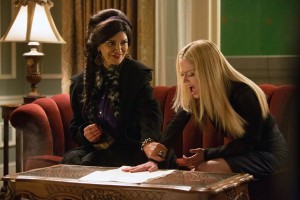 Entertainment Weekly is reporting that Emmy winner Shohreh Aghdashloo (24) is set to guest star on a late October episode of CBS crime drama Scorpion. She’s set to play Dr. Cassandra Davis, a psychologist who evaluates the team of crime solvers following a particularly costly outcome to one of their cases.

Created by Nick Santora (The Sopranos), Scorpion follows computer genius Walter as he brings together a group of fellow geniuses in order to solve complex global problems that those lacking their intelligence might not be able to. The series stars Katharine McPhee (Smash), Robert Patrick (True Blood), Eddie Kaye Thomas (American Pie), Jadyn Wong (Being Erica), and Ari Stidham (Huge).

In addition to her role on the FOX thriller, Aghdashloo has appeared on the likes of Grimm, FlashForward, and The Mob Doctor. Her next series regular role is on Syfy’s upcoming The Expanse, where she’ll be playing Chrisjen Avasarala. She’s the second Scorpion guest star announced recently, with NCIS: Los Angeles‘ Linda Hunt confirmed to be appearing on the show come October.

Scorpion is slated to premiere Monday, September 22nd at 9:00 on CBS.

Will you be watching Scorpion? What type of impact do you think Dr. Davis will have on Walter and the rest of the team? Who else would you like to see guest star on Scorpion?