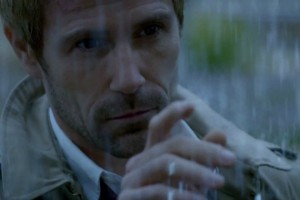 Warner Bros. Television has announced its plans for New York Comic-Con, as it will be bringing Gotham, Constantine, The Following, Forever, and Person of Interest to the pop culture celebration that begins next month.

Beginning at 7:00 p.m. on Saturday, October 11th, Constantine will be making its first appearance at New York Comic-Con with a panel that features the likes of Matt Ryan, Angelica Celeya, and series creator David S. Goyer. The first episode of the series, based on DC Comics character Hellblazer, will be screened on Thursday, October 9th at 8:30 and aired on NBC Friday, October 24th at 10:00.

Sunday, October 12th will see The Following paneled at 11:00 a.m. on the Empire Stage; slated to represent the series, which underwent a second showrunner change of the summer recently, are executive producer Marcos Siega, Kevin Bacon, and Shawn Ashmore. The third season of The Following is set to premiere next year on FOX. 1:15 p.m. is the start of the Gotham panel on the main stage, as the comic drama from Bruno Heller (Rome) sends the likes of Ben McKenzie, Sean Pertwee, Robin Lord Taylor, and Erin Richards for its first trip to the pop culture gathering. The series premiere of Gotham airs Monday, September 22nd at 8:00 on FOX.

ABC supernatural procedural Forever will make its New York Comic-Con premiere at 3:15 on the Empire Stage, with Ioan Gruffudd, Alana De La Garza, and executive producer Matt Miller all slated to be in attendance at the panel. Forever will have a special preview behind Dancing with the Stars on Monday, September 22nd before moving to its regular time slot on Tuesday, September 23rd at 10:00. Immediately after Forever comes Person of Interest, whose panel begins at 4:30. Jim Caviezel, Michael Emerson, Amy Acker, Kevin Chapman, and executive producer Greg Plageman will be answering questions about the CBS drama’s buzzed about third season and what to expect from the upcoming fourth season, which premieres Tuesday, September 23rd at 10:00.

Also slated for New York Comic-Con is a special screening of the second season premiere of CW drama The 100. The screening will take place Thursday, October 9th at 8:30, while the episode will have its television premiere Wednesday, October 22nd at 9:00.

Will you be going to New York Comic-Con? What other shows would you like to see paneled this year? How do you think broadcast genre shows will do this season?