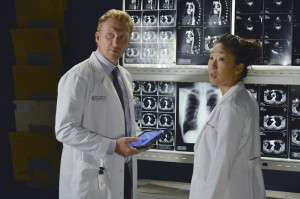 Grey Sloan Memorial is moving on after the storm and coping up with aftermath of destruction. But nothing is going right, the hospital is still a mess and so are most of the doctors. The board is unable to get together with Derek and Mer on leave, taking care of the baby, Christina can’t be alone with Owen and Arizona and Callie wouldn’t be in the same room as each other. So, here are the highlights of Grey’s Anatomy’s episode ‘Everybody’s Crying Mercy’, aired on Thursday:

The Shepherds: there is a lot going on at the Shepherds’ place right now, with the baby and Callie and her daughter, quite a handful! Derek and Meredith are sleep deprived and while he dozes off in the parking lot, she crashes outside the shower, with Christina on the phone. Callie is helpful but let’s face it, she won’t be around forever.

Hospital not on-board: Owen & Jackson argue about how to get things back and rolling again. Owen is completely upset in the absence of the board as he cannot make the decisions by himself. Finally, he comes up with a plan and tricks everyone to come for an emergency where they plan a fund-raising gala for the hospital.

Richard not looking good: Webber is not himself anymore, he keeps refusing to certain treatments which are good for him and will help him survive. Meredith reaches the hospital with the baby to ensure that Richard takes the feeding tube but before that, Shane convinces him. And then, Richard takes Meredith off guard by saying she failed him and that he regrets his choice of making her the decision maker.

Jolex: Christina makes fun of the fact that Alex and Jo haven’t slept together yet. In fact, Jo is sick of Alex not making a move on her. Alex wants this to be special and towards the end, he finds her alone in the apartment and puts an end to the waiting.

Calzona: Callie is hesitant to go for couples’ therapy with Arizona and she consults Owen and Christina, who also took the therapy before. But before the session, Callie tells Arizona that she needed this more because she was unhappy before she cheated on her and suggests her to do it all by herself.

Move on: Christina tries too hard not to touch Owen’s arm, every time they are alone and thinks they will just end up in the same place they started off from. So, she suggests they see other people and after a long pause, an anguished Owen agrees.

The next week’s episode with the gala, ‘Puttin’ on the Ritz’ will be the 200th episode of the series.

Don’t forget to watch Grey’s Anatomy this Thursday, Oct. 10 at 9 pm on ABC.