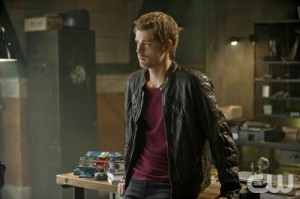 A trailer for the first eight episodes of new CW genre series The Tomorrow People was unveiled after the show’s session at New York Comic-Con yesterday. The clip, which premiered a day after British adaptation’s series premiere, shows several upcoming plot points, including Stephen (Robbie Amell) becoming a double agent for the Tomorrow People, Astrid witnessing Stephen’s power for the first time, and John struggling to retain his hold over his people and attempting to find the mole that had burrowed its way into their midst.

The Tomorrow People tells the story of teenager Stephen Jameson who, up until a year ago, thought of himself as a fairly ordinary guy. However, he’s since been hearing voices in his head and waking up in strange places that he didn’t fall asleep in, so any sense of normalcy he once had has been replaced by the sinking feeling that he’s not going to get better and that he’ll have to live out the rest of his days in an asylum. Tired of the treatments he attempts not working and of feeling like an outcast, Stephen decides to listen to the voice in his head and discovers that he’s a part of The Tomorrow People, a newly developed race of humans who claim to be the next step in evolution with their telekinetic, telepathic, and teleportation abilities.

The Tomorrow People airs Wednesdays at 9:00 on The CW. The series just had three additional scripts ordered by the network, a vote of confidence that came about due to the great retention its series premiere had with the season premiere of Arrow.

Are you watching The Tomorrow People? Did the trailer/sizzle reel make you more excited for what’s to come? Should more new series, especially genre shows, release material like this to give people an idea about where they’re headed?