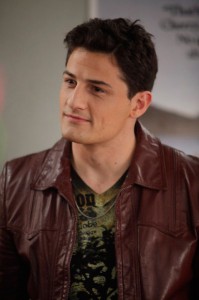 According to TV Guide, Dollhouse alum Enver Gjokaj has signed on for a major recurring role on Lifetime supernatural drama Witches of East End, which premieres this past Sunday. He’s reportedly set to play Mike, a mysterious novelist who takes an interest in Ingrid. However, he has ulterior motives for getting closer to the Beauchamp daughter, which could put her (and the rest of her family) in grave danger. Gjokaj’s first episode will air on November 17th.

We’ve already seen that Freya dealing with a vengeful former lover from another lifetime, so I don’t think that Gjokaj will be playing a similar role in Ingrid’s life, especially since he’ll be introduced a little bit into the season and likely after the shy librarian has gotten a better grasp on her powers. However, considering that his interest is more than simply romantic, it seems likely that he knows about the Beauchamp family’s powers and doesn’t want to know Ingrid that he knows, pointing toward him working for another supernatural entity (the shapeshifter?) and attempting to mine Ingrid for information on both her newfound powers and the whereabouts of Joanna. But, in a more out there theory, could Mike simply be the latest form of the shapeshifter, hoping to lull Ingrid into a false sense of security before attacking, or the true Big Bad that the Beauchamp family has to watch out for this season?

In addition to his role on the FOX sci-fi drama, Gjokaj has appeared on the likes of Community, Dexter, and Person of Interest. He joins Freddie Prinze, Jr. in being added into the middle of the drama’s first season, with the 24 alum playing a shy entomologist who falls for Wendy in an upcoming episode.

Witches of East End airs Sundays at 10:00 on Lifetime. You can check out a preview of the second episode of the series, where Ingrid is tasked with having to save both her sister Freya and her aunt Wendy, here.

What did you think of the first episode of Witches of East End? In your best estimation, why will Mike want to get closer with Ingrid?