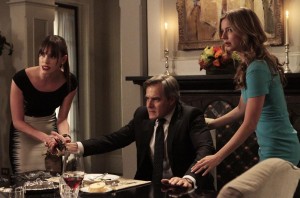 At first glance, Emily Thorne and Conrad Grayson aren’t exactly the Revenge characters that share the deepest bond. Sure, she’s slated to become the Grayson daughter-in-law in August, the two are both extremely manipulative and know how to work people, and they’ve spent plenty of time around one another in social situations, but the Hamptons isn’t a place known for its ethics and rigid moral code, so it’s not like two people who know how to lie being in the same vicinity is some revelation to behold. No, what bonds Conrad and Emily is that they’ve been reconsidering who they are this season on Revenge, including the very fiber that holds their web of lies together and whether they have the desire or the strength to continue down their respective paths of darkness.

On the next episode of Revenge, both the Grayson titan and soon-to-be Mrs. Daniel Grayson are battling with feelings of guilt over everything they’ve done in their quest for fulfillment – absolute power for him, vengeance for her father for her. The two had previously been too focused on their goals to really make an in depth evaluation of what their actions have done to their souls, but with Conrad staring his own mortality in the face and Emily beginning to hurt people (Father Paul, Jack) who were either innocent bystanders or obviously redeemed from their former lives, it’s time for them to determine whether they’re okay with what they’ve done to get where they are. Are the Emily Thorne and Conrad Grayson that stand before us today who they want to be? If not, is there time (or opportunity) for them to change course and make the type of alterations that will bring them the type of inner peace that they’ve been seeking?

Elsewhere on Revenge, the housewarming party Nolan throws for himself takes a sharp turn when an unexpected guest arrives, shocking the jaded Hampton elite with their presence (and who they’re accompanied by).

Do you think that Conrad will go through with his atonement or will Victoria stop him? Can Emily keep her relationship with Daniel alive despite the bomb Victoria drops about Aiden? Is the Aiden/Victoria alliance the real thing or is one of them hiding their true motives from the other?