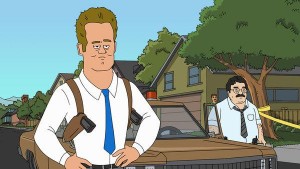 According to TV Guide, FOX has canceled animated comedy Murder Police before it aired an episode on the network. The series, from Jason Ruiz (A Day in the Life) and David A. Goodman (Family Guy) and produced by 20th Century FOX TV, was reportedly rejected due to the network’s dissatisfaction with early episode cuts. Once Murder Police completes more episodes, the studio will shop the series to various cable outlets, likely including Comedy Central, FXX, and Adult Swim.

Featuring voice work from the likes of Wilmer Valderrama, Jane Lynch, Chi McBride, Will Sasso, and Justina Machado, Murder Police centers on Manuel Sanchez, a good-nature policeman who wants to efficiently solve the crimes that come across his desk. However, due to his own neuroticism and the incompetence of those in his precinct, that’s easier said than done, as his violence-prone partner won’t say no to a bribe and he has to deal with a self-righteous single mother, an apathetic veteran cop, and a supervisor who expects failure from his precinct. Can Manuel find a way to do his job despite the obstacles his co-workers set in front of him?

FOX seems to have its Sunday lineup for next season set except for the post-Family Guy slot, as The Simpsons, Bob’s Burgers, and Family Guy are all set to return in 2014-2015. With American Dad moving to TBS and Murder Police canceled, there are two options that remain: introduce a scripted series into the Animation Domination lineup or develop a new animated series, of which they have none currently on their slate for next season. However, the network still has another couple of months to make a decision, considering that an animated season takes about nine months to create, and with development season heating up, it’s only a matter of time before they have several options to choose from.

Do you think that FOX should have kept Murder Police? What should the network do on Sundays next season without American Dad? Will Murder Police find a home on a more compatible cable network?