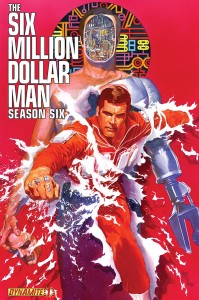 It was 1978 when The Six Million Dollar Man was last aired on NBC. After all these years of waiting for a sixth season of the Lee Majors starrer, finally the fans’ prayers have been answered. Dynamite Entertainment will be launching the sixth season of The Six Million Dollar Man next year. And what’s more, the comic book strips produced from the TV series, which also stopped after the fifth season ended, will once again revive with the new season finally coming up.

The writer, James Kuhoric promises to revive the magic of the show just like the old days, especially focusing on the trademark of the show being the action sequences in slow motion. The writer said that in the new season they have introduced the Kung Fu Slow Motion and went all the way to create the sound effects and every little detail which captures the essence of that era.

So, what else can you expect which can bring over nostalgia from the original series? The cover artist of the comic book strips, Alex Ross suggested the villain to be Maskatron, the robotic master of disguise, which was a part of the toy series, launched with the old series. The CEO and Publisher of Dynamite, Nick Barrucci compared Maskatron with Joker (Batman) and Doctor Octopus (Spider Man). He said that people remember this toy from their early childhood days and to see it come alive on screen would be pretty exciting for the fans.