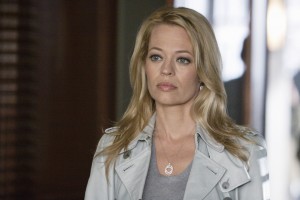 Syfy has announced that Star Trek: Voyager alum Jeri Ryan has signed on for a multi-episode arc on upcoming thriller Helix. She’s set to play Constance Sutton, manipulative COO of the Ilaria Corporation, owner of the Arctic research facility where the series takes place.

From Ronald D. Moore (Battlestar Galactica), Lynda Obst (Contact), and Steven Maeda (Lost), with the latter acting as showrunner, Helix follows a team of CDC scientists to research facility Arctic Biosystems, where they’ll be investigating a possible disease outbreak. The deeper they get into the mysterious symptoms, the more trouble they’ll be finding themselves in, as the desolate climate, the extremely high pressure they’ve been put under, and the vested interest of other parties in keeping a cure for the outbreak locked away begin to weigh on them heavily. Additionally, there’s a chance that in looking into the outbreak, one (or several) of them could become infected, endangering everyone at the facility and forcing the team to make difficult decisions.

In addition to her role as Seven of Nine on the cult sci-fi hit, Ryan has appeared on the likes of Body of Proof, Two and a Half Men, and Boston Public. She joins a cast that includes the likes of Hiroyuki Sanada (47 Ronin) as Dr. Hiroshi Hatake, the mastermind of the research facility; Kyra Zagorsky (Green Season) as the adulterous wife of Dr. Adam Farragut (Billy Campbell); and Mark Ghanime (Emily Owens, M.D.) as Balleseros, a U.S. military liaison to the CDC.

Already in production, Helix is set to premiere sometime in 2014. You can watch teasers for the series here.

Will you be watching Helix? Do you think that Ryan is a strong addition to the cast? What other genre favorite actors/actresses would you like to see stop by the show during its first season?