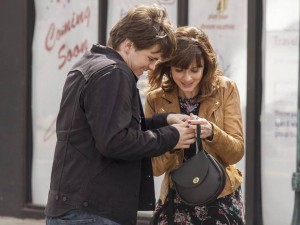 Deadline is reporting that FOX has cut the episode order for romantic comedy Us & Them, an American adaptation of British series Gavin & Stacey starring Jason Ritter and Alexis Bledel, from the originally planned 13 to the six already produced (plus the pilot). Citing concerns over the tone of the series, decidedly less edgy than fellow new comedies Dads and Brooklyn Nine-Nine, the network has officially wrapped production on Us & Them, which was in the middle of an early production hiatus.

It’s a similar fate that befell last season’s The Goodwin Games, which ended up being burned off this past May, so the series has essentially been cancelled before airing an episode, the second FOX series to suffer that fate this week following Murder Police. Of course, FOX will likely air the entirety of Us & Them at a date, but the fact remains that they’re now down two of the comedies that they ordered at upfronts.

Helping matters is that they’ve picked up midseason entry Mulaney for six episodes and have ordered additional scripts for Dads and Brooklyn Nine-Nine, despite the latter two being fairly lethargic in the ratings the past several weeks. FOX also still has Surviving Jack, starring Christopher Meloni as a tough father raising children in the 90s, and Enlisted, a military brother comedy that was originally slated to premiere next month but was delayed until January.

The move might be the saving grace for The Mindy Project, as it leaves the sophomore comedy as the most compatible comedy to follow New Girl and the lone female-centric comedy apart from the Tuesday bloc centerpiece. Us & Them looked as if it could replace The Mindy Project. which has been struggling in the ratings, sometime this season, but without its biggest threat lurking in the shadows, Mindy should be able to air its complete season. However, its fate for next season is still up in the air and will depend both on how the new comedies fare and what type of voice FOX focuses on in its comedy development for 2014-2015.

You can check out the trailer that FOX released for Us & Them at upfronts below.

Do you think that FOX made the right move in essentially canning Us & Them? Could this concept with this cast have worked on another network? Is the move a good sign for the future of The Mindy Project, seeing as how Us & Them seemed prime to follow New Girl?