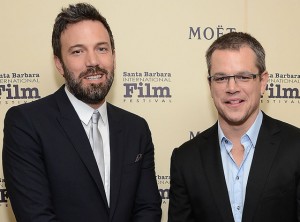 Ben Affleck and Matt Damon have begun another project together, this time setting up a half-hour comedy at CBS.  Tom Papa is set to star, Variety is reporting.

More Time With Family centers on a man (Papa) who gives up a life on the road to spend more time at home with his family, however, when he gets that time, he realizes that no one asked him to.  The project is based on Papa’s stand-up comedy and Damon’s experiences – the two previously worked together on Behind the Candelabra and The Informant.

CBS has offered the project a pilot commitment, with 20th Century Fox TV producing.  Damon and Affleck will executive produce through their own Pearl Street Films; Papa will serve as a co-writer.

Affleck also recently set a Boston period drama with Fox titled The Middle Man, which he will direct.