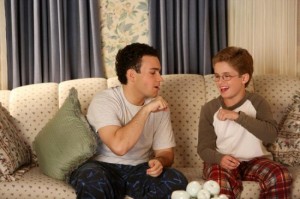 This week on TVHackr, we talked about the latest Netflix original project, what’s happening on HBO in January, and possible ABC comedy extensions, while the internet touched on television fashion, scary episodes, and pilot season as a concept.

FOX Cuts Episode Order for Us & Them, Orders More Dads Scripts
FOX has halted production on romantic comedy Us & Them, which stars Jason Ritter and Alexis Bledel, while ordering six additional scripts for controversial Dads.

Ben Affleck and Matt Damon Team Up for CBS Comedy
The Oscar-winning duo have a comedy at CBS in development that stars comedian Tom Papa as a man who gives up a career on the road to spend time with his family.

The White Queen Episode 9 Recap: Save or Slaughter
While Margaret Beaufort learns that she has more power than even she knew, Elizabeth tries to negotiate with Richard and Anne worries that her words might have done irreparable damage.

Grey’s Anatomy 10.04 Review: “Puttin’ on the Ritz”
While the doctors throw a benefit gala for Grey + Sloan Memorial, the interns are left to fend for themselves and Bailey finds herself stuck between two difficult patients.

Witches of East End 1.02 “Marilyn Fenwick, R.I.P.” Recap
Ingrid is tasked with both resurrecting Wendy and helping Freya escape the photo, while Joanna gets questioned as to her role in the murder and the girls discover something about Aunt Marilyn.

Witches of East End 1.03 Preview: Should Joanna Use Dark Magic to Identify the Shifter?
On the next episode of Witches of East End, Wendy tries to teach the girls about their powers and Ingrid struggles with the lurking consequences of the resurrection spell.

Netflix Adds Psychological Thriller from Damages Creators
Production on a psychological thriller from the creators of Damages is set to begin sometime next year. The series will focus on a family dealing with the return of its black sheep.

Susan Sarandon to Star in NBC Comedy Pilot, Daughter to Co-Star
Along with daughter Eva Amurri Martino, Susan Sarandon is attached to Growing Ivy, an NBC comedy about a career woman who lives with her eccentric mother.

Black Sails Official Trailer: Deliver Us from Evil
At New York Comic-Con, Starz released the official trailer for upcoming pirate drama Black Sails, which has already been renewed for a second season and will premiere this January.

Castle Review: “Number One Fan”
While Castle is called in to negotiate a hostage crisis with a murder suspect who will only speak to him, Beckett makes a major step in her career thanks to Gates.

Betrayal 1.04 Preview: Does Drew Already Know About Jack and Sara?
On the next episode of Betrayal, Karsten begins feeling his power slipping away, T.J. runs with the wrong crowd in prison, and Drew confronts Sara about her whereabouts.

Betrayal Spoilers: Will Sara and Jack Have Their Affair Exposed?
Coming up on Betrayal, Sara becomes increasingly concerned that her affair with Jack will be exposed, while Jack makes a confession that leaves him vulnerable and crucial evidence turns up in the murder investigation.

How I Met Your Mother 9.05 Review – The Poker Game
While Barney is forced to pick sides in a fight between Robin and her mother, Ted and Marshall get into a dispute over wedding gifts and thank-you notes.

Bitten: Watch the First Trailer for the Upcoming Syfy Drama Here
The first trailer for upcoming Syfy werewolf drama Bitten, starring Smallville‘s Laura Vandervoort, has been released. The show will premiere sometime in 2014.

Time of Death: Watch a First Trailer for the Showtime Documentary Series Here
Showtime has released the first trailer for upcoming documentary series Time of Death, which focuses on terminally ill patients living out their last days.

Ryan Murphy: Season 6 will be the last one for Glee
Glee creator Ryan Murphy has confirmed that next season will be the show’s final and given the first hint as to the direction season six will take.

News’ Need to Pump Web Traffic Presents Speedbump for Network TV Coverage (Variety)
Variety took a look at the evolving nature of news-outlet behavior and how the interests of TV networks and newspapers are no longer closely aligned.

Netflix Is Coming Soon to Your TV Through Your Cable Box (Wired)
Wired reports that Samsung has announced that Netflix will be available to its customers through its Smart Cable Box.

The Top 50 Scariest Television Episodes of All Time, Part 1 (io9)
io9 has begun a countdown of the 50 scariest episodes of television of all time, with the first part including installments of Angel, Game of Thrones, and True Blood.