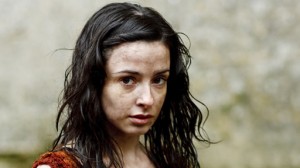 Starz has announced that Merlin alum Laura Donnelly has joined the cast of the network’s upcoming Outlander adaptation. She’s set to play Jenny Fraser Murray, Jamie’s stubborn older sister who has acted as a surrogate mother to him. When the series begins, she’s married to Jamie’s best friend Ian and has one child with another on the way.

Said to combine romance, history, science fiction, and adventure, Outlander tells the story of married World War II nurse Claire Randall (Caitriona Balfe), who finds herself transported back to 18th century Scotland. Once there, she meets and falls for Scottish warrior Jamie Fraser (Sam Heughan), thereby causing her to reevaluate whether she wants to find a way home or try to start her life over in this unfamiliar time and place. Based on the series of novels by Diana Gabaldon, and set to be showran by Battlestar Galactica‘s Ronald D. Moore, the show will have its first two episodes directed by John Dahl.

In addition to her role as Freya on the BBC drama, Donnelly has appeared on the likes of Missing, The Fall, and Casualty. She’s the second addition to the Outlander cast in the last week, following the announcement that Borgias actress Lotte Verbeek will be playing Geillis Duncan. Other members of the cast include Duncan Lacroix (Game of Thrones) as Murtagh FitzGibbons Fraser, Tobias Menzies (Rome) as Frank Randall/Jonathan “Black Jack” Randall, and Gary Lewis (Gangs of New York) as Colum MacKenzie.

Production on Outlander is currently underway in Scotland in preparation for a 16-episode first season, which will premiere sometime in 2014. More casting will likely be announced in the coming weeks.

Do you think that Donnelly will make a good Jenny? Who else would you like to see join the cast of Outlander? Will the show be able to live up to the series of novels it’s based upon?