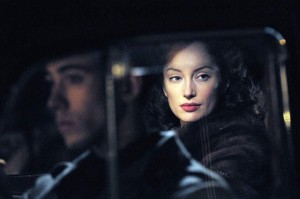 TVLine is reporting that Borgias alum Lotte Verbeek has signed on to join the cast of Starz’s upcoming adaptation of Outlander. She’s set to play Geillis Duncan, a Scottish woman who has her hand in the black arts and befriends Claire, though she has other motivations than friendship in getting close to the transplanted nurse.

Based on the series of novels by Diana Gabaldon, Outlander tells the story of married World War II nurse Claire Randall as she finds herself mysterious transported into 18th century Scotland. Once there, she befriends and eventually falls for Scottish warrior Jamie Fraser, the man she initially became close with to protect herself. All Claire wanted to do when she first arrived in Scotland was find a way home, back to her quiet, comfortable life in the health care profession and with her husband Frank. However, she now must make a decision on whether her desire to go home outweighs her sudden feelings for Jamie or whether she wants to make an honest go at a life in a time and place she never thought possible she could find herself in.

In addition to his role as Pope Alexander’s mistresses Giulia Farnese on the Showtime period drama, Verbeek has appeared in Italian TV movie The Swing Girls and Netherlands-based television series De co-assistent, De Troon, and Spoorloos verdwenen. She joins a cast that includes Caitriona Balfe, Sam Heughan, and Duncan Lacroix, as well as Jamie Fleet, who will portray Reverend Wakefield, a Scottish historian who Claire knows from the 1940s.

Production on the 16-episode first season of Outlander has began. The show is set to premiere sometime in 2014.

Do you think that Verbeek will make a good Geillis? How is the cast of Outlander shaping up, in your opinion? Who else would you like to join the ensemble for the first season?