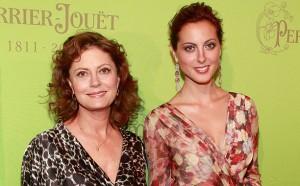 Growing Ivy follows Ivy Davis, played by Martino, a Type A career woman with a faltering personal life.  She invites her free-spirited, eccentric mom Franckie (Sarandon) to move in with her to work on their relationship.  The goal?  To find some kind of the stability that was lacking in her childhood, bring balance to her life and hopefully…find love.

The comedy is based on an idea from Martino, and landed at NBC with a pilot commitment.

Martino and Sarandon will serve as co-executive producers along with Parks and Recreation‘s Rashida Jones and Will McCormack.

Martino’s TV credits include New Girl, and The Mindy Project (both Fox comedies). Sarandon also recently signed on for a one-episode guest spot on CBS’ Mike and Molly.