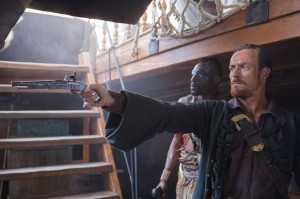 At New York Comic-Con, Starz released the official trailer for upcoming pirate drama Black Sails, which will be produced by Michael Bay. The series, whose first season is eight episodes long and takes place 20 years before the events of Treasure Island, stars Toby Stephens as fearsome Captain Flint, who takes on a new addition to his crew in fast-talking John Silver. Flint’s crew will be in charge of protecting New Providence Island, a criminal haven known for housing deviants,, deviance, and every type of crime and criminal known to man; it’s also the one place that a pirate can be a pirate without facing legal and societal ramifications, a haven of enlightened ideals and stunning brutality. However, there’s a danger that it could be lost to the pirates forever and turned into a place they hardly recognize, should Flint’s crew fail to defend it in the way they can.

In addition to Stephens, Black Sails stars the likes of Zach McGowan (Shameless) as Flint’s rival Captain Vane; Toby Schmitz (Griff the Invisble) as Vane’s right-hand man Rackham; Jessica Parker Kennedy (The Secret Circle) as Max, a tortured young prostitute who becomes familiar with the type of darkness lurking in New Providence; Clara Paget (Fast & Furious 6) as the beautiful but cold-blooded Anne Bonny; and Hakeem Kae-Kazim (Hotel Rwanda) as Mr. Scott, an important cog in the smuggling operation on the island, which is led by Eleanor Guthrie.

Already renewed for a second season, Black Sails will premiere this January on Starz. You can check out an additional trailer here, as well as key art for the series here.

Will you be watching Black Sails? Do you think that the early renewal will come back to bite Starz, like it did with Boss and Magic City? What would you like to see happen during the first season of the show?