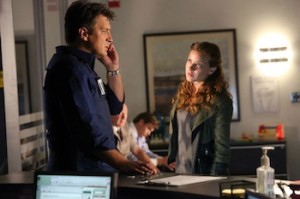 Monday night’s episode of Castle was firing on all cylinders. It’s just the fourth episode of the season, and I’m already declaring “Number One Fan” the best episode of the season. (I’ll be saying that a lot.) Every single human emotion went through me as I watched this episode. This show is a cut above the rest.

I could really get used to an episode of Castle opening up with Caskett in bed being all adorable. The opening scenes of Castle are in a league of their own. Beckett was confused about what she was going to do with her life. She was fired from the FBI and couldn’t get her job back at the NYPD because of a hiring freeze. I really felt for her. I could not stop laughing when she suggested she could become a mall cop. Truth be told, she’d be the best damn mall cop ever. The cuteness continued with Castle telling Kate, she was with him now and she didn’t have to work. Kate came back with one of the best lines of the night, “I don’t need to work? Does that mean you’re my sugar daddy?” Then of course Pi came in their bedroom and ruined the moment. Seriously? Why is Pi still sleeping on Castle’s couch? Then the rest of the gang came into the bedroom and really ruined the mood. Things got really interesting when Alexis said Captain Gates was on the phone. Beckett perked right up, but she wasn’t calling for Beckett. She was calling for Castle.

The case this week centered around Emma Riggs, played brilliantly by Alicia Lagano from “The Client List.” After Emma discovered her dead boyfriend Angelo’s body, she ran into a dental office and took hostages at gunpoint. The catch, she demanded to talk to Castle and only Castle. She was a huge fan of Castle’s and she wanted him to help prove her innocence. Of course, Castle jumped at the chance to help. I loved that Kate went into cop mode, even though she technically isn’t a detective anymore. Then Kate went into fiancee mode and helped Castle with his bulletproof vest and told him she’s looking forward to spending the rest of her life with him, so he better not do something stupid in there. I swear, this show is pure fanfiction. These writers are incredible.

When Castle was walking towards the dental office, Beckett was so worried as I would be. Even when Stana isn’t speaking, the expressions on her face say it all. The way she was watching Castle and twirling her engagement ring said it all. She felt so helpless in that moment. I just loved when Castle turned back to look at Kate and she smiled at him, reassuring herself everything was going to be okay. The little details really do make such a difference.

I thought it was incredible of Gates to allow Beckett to work the crime scene even though she didn’t get reinstated. I love Gates even more now. Captain Gates of 2 years ago would never had allowed that. Every character has grown so much, even Gates. I hope we get an episode centered around Captain Victoria Gates this season.

Hallelujah! Lanie has emerged! I was seriously wondering where she was hiding all this time. Of course, she asked Kate why she wasn’t off planning her wedding. I totally agreed with Beckett, let Castle and Beckett enjoy their engagement, no need to rush things. The funniest was Ryan saying wait till after the wedding when everyone will be asking about little Caskett babies. Beckett’s facial expression was priceless.

I know Castle isn’t a detective, but over the years he really has proven what an amazing asset he is. The way he noticed Emma’s texts weren’t how she normally texts was incredible. Many people would have overlooked that, not Castle. Now the team was on the right track. Emma was framed for Angelo’s murder. The whole group working the case all together was great. The dynamic was back! Seeing Castle and Beckett working together again was fantastic. I really missed these two solving crimes together.

Ryan and Esposito found out Emma committed murder before. Emma Riggs, a.k.a Emma Jones, stabbed her foster brother Billy the same way Angelo was killed. Emma knew how her past would look to Castle, so she didn’t tell him. The truth was Billy pulled a knife on Emma, so she tried to stop him. After Castle believed Emma’s story, they put their heads together and figured out Angelo broke into the orphanage to try and get Emma’s adoption records so she would know who her real parents were. Then the scary moment of the night came when that genius hostage Mickey Gerhardt tried to play hero and Emma accidentally shot Castle right in the vest. I thought my heart was going to jump out of my chest.  After the sound of the gun shot went off, Beckett’s facial expression was the same in S4 Ep07 “Cops & Robbers” when the bomb went off in the bank vault. I’m going to have to re-watch it for research purposes.

As the episode went on, the case got more interesting. Emma’s real parents were Stacy Moore and Aaron Stokes. The very powerful Aaron Stokes. Aaron Stokes had an affair with Stacy that produced Emma. The lawyer, Raymond Vance who paid off that NYPD employee turned out to be Stokes’ son in law. Raymond broke into Angelo’s apartment to get Emma’s adoption records after Angelo’s death. Raymond had spiked Emma’s scotch bottle and swapped it out for an empty one. It was all about money. The Stokes were about to transfer a majority of their wealth in a trust for their daughter, Raymond’s wife. Raymond didn’t want some orphan coming around and trying to make a claim for half the money. So when Angelo was looking for Aaron Stokes, but found Raymond instead, Raymond knew he had to get rid of him because Angelo knew the truth. Greed is never good folks. When will people learn this? The writers really got me though. I honestly thought that quick tempered hostage, Mickey Gerhardt played by The Young and the Restless’ Billy Miller had something to do with Angelo’s murder. Boy was I wrong. That’s what I loved about the episode. I was questioning who the killer was until the very end.

I thought it was such a sweet moment when Aaron met Emma for the first time. On her birthday no less. The best part of the episode had to be Beckett getting her job back! It was all thanks to Mr. Stokes. Since Beckett is back, Castle can serve as a consultant again. The commissioner now knows they’re engaged, so it’s okay to work together just as long as they behave in the workplace. Drinks were on Castle at the Old Haunt! I’m glad that the writers didn’t forget about that place. That little Caskett make out session in the precinct was perfection!  A perfect ending to a great episode.

My favourite lines of the night:

“What does it say about your writing when your #1 fan tries to kill you?” – Ryan

“If there’s one thing you excel at Castle, it’s talking.” – Beckett

Next week our favourite bearded friend shows up in the Castle universe. I’m sure it’s going to be out of this world.

Now it’s your turn readers. What did you guys think of the episode? Who else let out a loud squee when Beckett got her job back? I’d love to read your comments. Sound off below.