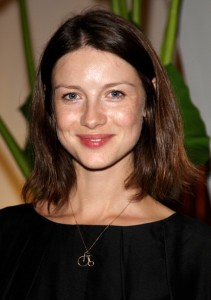 The wait for Outlander fans is over, as Starz has announced that Irish actress Caitriona Balfe (Now You See Me) has landed the role of Claire Randall in the upcoming adaptation of the Diana Gabaldon novels.

Said to blend romance, history, science fiction, and adventures, Outlander follows Randall, a married World War II nurse who finds herself mysterious transported back to the year 1743. Once there, she must marry young Scottish warrior Jamie Fraser (Sam Heughan) in order to protect herself, but soon she finds herself falling for him. From the time she arrived in Scotland, Claire was determined to find whatever way she could to get home to her husband and the live she once knew, but now she must do some serious soul searching to determine what exactly she wants from her life and which man would be the most ideal person to help her achieve that.

In addition to her role in the Jesse Eisenberg-starring thriller from earlier this year, Balfe has appeared in the likes of Super 8, Lost Angeles, and Crush. Outlander will be her first scripted television series role following performances in web series H+ and The Beauty Inside, a series of TV mini-series shorts. She joins a cast that includes Tobias Menzies (Rome) as Claire’s husband Frank and Frank’s 18th century ancestor Jonathan “Black Jack” Randall; Graham McTavish (The Hobbit: An Unexpected Journey) as Dougal MacKenzie, War Chieftain of Clan MacKenzie and uncle to Jamie; Gary Lewis (Gangs of New York) as Colum MacKenzie, Jamie’s maternal uncle who suffers from Toulouse-Lautrec Syndrome; and Duncan Lacroix (Game of Thrones) as Murtagh Fitzgibbons Fraser, Jamie’s uncle.

Filming on the 16-episode first series of Outlander is set to begin this September in Scotland.

Do you think Balfe is a good choice for Claire Randall? If not, who would you have rather seen cast? Who else would you like to join the series?