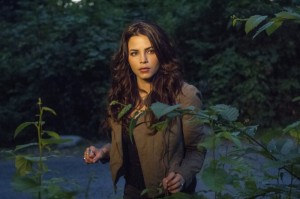 Freya’s mind has been all over the place on Witches of East End, with the discovery that she comes from a line of witches, that she’s lived and died over a dozen times, and that her feelings for Dash have grown complicated by the presence of Killian. However, despite everything that she’s been going through, she’ll have to confront the two brothers and help them come to an understanding after their mother Penelope enlists her as a sort of mediator for their years-long conflict. Had Freya not hooked up with Killian, this could be something that takes her mind off her situation at home and allows her to funnel her energy toward something both productive and helpful for Dash, but their encounters and the sexual tension that still exists between them can only make this attempt at a peaceful resolution that much more painful. Can Freya find a way to bring the brothers together without exposing herself in the process?

Sunday, October 20th – “Today I Am a Witch”
Ingrid struggles with the consequences of the resurrection spell; Joanna tries to figure out which of her former enemies might be responsible for framing her; Wendy teaches Ingrid and Freya how to use their powers; Freya gets a new coworker at the bar.

Sunday, October 27th – “A Few Good Talisman”
Joanna’s immortal attorney prepares for her murder trial; Ingrid rethinks her relationship with Adam; Penelope recruits Freya to help her mend the rift between Dash and Killian; Wendy seduces an entomologist while trying to gather ingredients for a spell; Joanna and Harrison try to protect Redmond from the shifter.

Who do you think is responsible for framing Joanna? Will Freya be able to mend the rift between Dash and Killian? How will Freya and Ingrid cope with having powers?