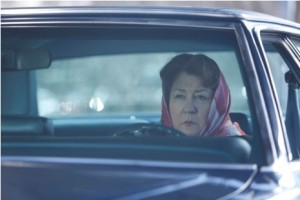 TV Line is reporting that The Americans hasn’t quite said goodbye to former handler Claudia, as Emmy winner Margo Martindale will be returning to the FX cold war drama for at least one episode in season two.

When we last saw Claudia, she had been pulled off of Phillip and Elizabeth’s assignment and reassigned, so the circumstances of her return should be fairly impactful for the couple. Granted, we don’t know the reasoning for her return (orders from a superior? discipline for the new handler?), but the conflict between Claudia and Elizabeth grew very personal by the end of her run in the city. Whatever stability that the latter has found with her husband following the events of the season finale might be shattered upon Claudia’s reappearance, as her deep-seated hatred of their previous handler could put her in a difficult enough place to where she won’t be as receptive to her husband as she could be. Is there a chance that Elizabeth doesn’t allow herself to stay under control around Claudia and the two get into a physical altercation? Or, given how much time has passed since their last meeting, could she find it in herself to remain civil around the woman she got removed from D.C.?

In addition to her role as Claudia, Martindale has appeared on the likes of The Millers, the CBS sitcom she currently stars in; Justified, where she earned her Emmy as Kentucky crime maven Mags Bennett; and Dexter. Her return comes months after Annet Mahendru (as Soviet mole Nina), Alison Wright (as FBI secretary Martha), and Susan Misner (as Stan’s put-upon wife Sandra) were named series regulars after appearing in season one.

The Americans returns for a second season on FX in February 2014.

Will you be watching The Americans this season? Under what circumstances do you think Claudia will return to D.C.? Should her return be a part of a multi-episode arc or would you rather have her for a one-off appearance?