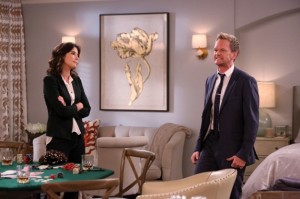 It’s safe to say that this was my favorite episode of HIMYM yet this season.  It was simple yet detailed, something the HIMYM team excels at, and added to the characters’ stories in a new way.

First of all, I’m finding that I love how each episode ends on some sort of cliffhanger that leads into the next episode.  At the start of the season, I was unsure of how this ‘one weekend’ season would work, but thus far I think everything is blending together nicely.

Fresh off of last week’s best man problems, this week finds Ted at odds with Lily and Marshall, who believe that he never gave them a wedding gift, when really Ted did get them a gift, which Stuart hijacked as his own.  So, while Lily and Marshall were angry about not getting a gift, Ted was stewing over not recieving a thank you note.   Flashbacks revealed the trio’s years-long attempts to drop hints.

The episode also sees Barney completely panicking over having to take sides between his brother James and Robin, who is annoyed at James’ incessant crapping all over marriage.  After Robin, trying to send a message to James about getting over it, takes his wedding ring in a game of poker, James goes running to Mommy, who storms in on the poker game, determined to defend her son.  Except…Robin takes her soon-to-be mother-in-law for her shirt…literally.  The game spirals Barney and Robin into a fight that pushes Barney into confronting his brother (when his intent had been to defend him).  Barney learns that James did, in fact, neglect his relationship, and declares in rage that they are no longer brothers, and to his mother, that the “mother-son thing” is over.

Of course, he makes up with Robin, but when Robin tries to apologize to Barney’s mother she gets a shock: “You won the battle, but I’ll win the war.”

This episode was supremely funny, right down to the way Lily, Zabka, and Ranjeet were hiding in the hotel room while Barney and Robin fought.  So many great lines, and great work by the cast.

What did you think of  “The Poker Game?”