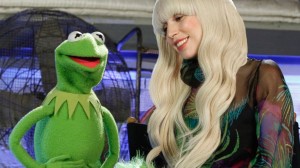 Lady Gaga will be taking the small screen this holiday season, collaborating with the Muppets for an ABC holiday special, the network announced today.

“Lady Gaga & the Muppets’ Holiday Spectacular” will feature the singer performing songs from her new album ‘Artpop’ with the Muppets, as well as appearances from Sir Elton John, Joseph Gordon-Levitt and RuPaull throughout the 90-minutes special.  Kristen Bell is also slated to star in a sketch with Gaga and the Muppets.

Gaga and the Muppets have a history, as the star took Kermit the Frog as her date to the 2009 MTV VMAs, and even featured Jim Henson’s Creature Shop in her 2010 Monster Ball tour.  She has also previously worked with ABC, and hosted “A Very Gaga Thanksgiving” on the net in 2011.