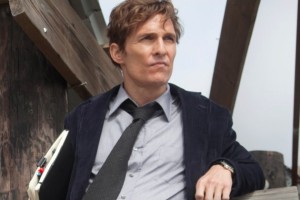 True Detective, which stars Matthew McConaughey and Woody Harrelson as Louisiana detective on the hunt for a serial killer, will make its series premiere on Sunday, January 12th at 9:00. The series, following the investigation that begins in 1985 and gets reopened in 2012, will have an eight-episode first season and features the likes of Alexandra Daddario, Michelle Monaghan, and Elizabeth Reaser. It’s HBO’s first winter drama since David Milch’s ill-fated Luck premiered in 2011.

The same night will see the third season of critically acclaimed comedy Girls making its debut with back-to-back new episodes at 10:00 and 10:30. The series was recently nominated for five Emmys, including Outstanding Comedy Series and Outstanding Lead Actress in a Comedy Series for star/creator Lena Dunham. On Sunday, January 19th at 10:30, HBO will premiere new comedy Looking, which follows the exploits of three gay friends in San Francisco. Created by Michael Lannan and to be executive produced by Sarah Condon and Andrew Haigh, the series stars Jonathan Groff, Frankie J. Alvarez, and Murray Bartlett. Guest stars for the first season include Russell Tovey and Scott Bakula.

It’ll be a pretty active few weeks for HBO at the close of the year, as the network will premiere two additional new comedies (British remake Getting On and Ja’mie Private School Girl, the latter from Chris Lilley) the last Sunday in November and the final season of Treme on December 1st. The three series were scheduled this way due to a shortened season of True Blood, which pushed the premiere of Boardwalk Empire up by two weeks and left a month with no new programming.

Will you be watching any HBO shows this January? Is this combination of series going to work out for the network? Does hearing about new January shows make you miss Enlightened, which Girls aired along with this year?