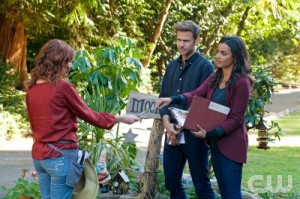 This week on TVHackr, we talked about Meredith Viera getting a daytime talk show, Cult reaching its series finale, and additions to FX”s The Strain, while the internet mentioned international television, the decline of Oval Office addresses, and Asperger”s.

Family Tree Season Finale Sneak Peeks: Tom’s Time in California Comes to an End
Tom”s trip to California comes to an end, but not before he learns more about Tumbleweed Tim, uncovers a startling revelation about Al, and has to make a difficult decision about the fate of his relationship with Ally.

The Fosters Recap: Cutting the Childhood Monsters Down to Size
While Callie ends up at Wyatt”s foreclosure party with Mariana, Jesus and Lexi face the proverbial firing squad when Lena and Stef have dinner with the Riveras – as well as Frank, Stef”s dad.

Starz’s Outlander Names Sam Heughan as Lead
The adaptation of the beloved novel series has found its Jamie Fraser in Scottish actor Sam Heughan. The show will begin production later this year for a spring 2014 debut.

Californication: Rob Lowe to Guest Star in Season 7
Eddie Nero will be popping up for one episode next season on Californication, as he”s set to guest star on the television project Hank”s working on.

News Roundup: Meredith Viera Gets a Talk Show, Person of Interest Key Cards, and Defiance Guest Stars
Among recent TV headlines are Meredith Viera getting a daytime talk show, Syfy offering a way to guest star on the second season of Defiance, and R&B girl group SWV earning a WE tv reality show about their comeback.

Cult Series Finale Spoilers: Jeff and Skye Remain in Hiding
Coming up on Cult, Nate tells Jeff to close the investigation out, while the inside show prepares to film a pivotal live scene and Skye continues looking for information about the disappearance of her father.

Mistresses Full Season-to-Date Available Online until July 22nd
ABC has made the full season-to-date of Mistresses available on WatchABC.com and the Watch ABC app through July 22nd. Six episodes have aired to this point.

Rectify Marathon to Air July 14th on AMC
AMC will be airing the entire first season of Sundance”s Rectify on Sunday, July 14th, beginning at 9:00 a.m. The show will return for a second season in 2014.

The Fosters Spoilers: Lena and Stef Learn Secrets About the Kids
Coming up on The Fosters, one member of the family ends up in the hospital, Jesus has a confrontation with his birth mother, and Callie educates Brandon on life as a foster kid.

Mistresses 1.07 Preview: Harry and Dom Face Off Over Savi
On the next episode of Mistresses, Harry and Dom come to blows over Savi, Joss moves in with April, and Anthony visits Karen once again – but Elizabeth Grey isn”t on his mind.

The Fosters 1.07 Sneak Peeks: Will Mariana Give Ana More Money?
On the next episode of The Fosters, Callie opens up to Brandon like never before, while Ana has a request that Mariana might not be able to help with and Jude looks to impress his new friend Connor.

Twisted 1.06 Sneak Peeks: The Investigation Points Toward Connecticut
On the next episode of Twisted, the investigation into the letter that Regina received points Danny, Jo, and Lacey toward a Connecticut apartment, but how will Kyle react when he finds out that his daughter snuck off to another state with a convicted murderer?

Face Off Season 5 to Feature Contestants From Past Seasons
Which former contestants will Face Off be bringing back to compete for the title? At least half of the veterans placed in the top four of their respective season.

Baby Daddy Season 2 Spoilers: Danny Attempts to Set Riley Up
Coming up on Baby Daddy, Riley undergoes a personal tragedy, Tucker”s girlfriend gets a job at Ben”s bar, and one of Danny”s teammates has his eye on Bonnie.

The White Queen: An Overview of the Upcoming Starz Period Drama
What is Starz”s upcoming period drama The White Queen about? Find out everything you need to know here.

Bates Motel Adds Three Characters for Season 2
A&E”s hit drama has added three characters for its upcoming second season, all of whom have some connection to Norma. Just who will we be seeing cross her path?

Hit the Floor 1.08 Sneak Peeks: German and Ahsha Clash Over the Punch
While Ahsha might be in trouble over what German did to Derek, Sloane learns something about the Devils organization that could put her daughter in serious danger.

Revenge: Justin Hartley Joins Season 3
The Smallville alum will be joining the third-year soap for a major multi-episode arc. But who will he be playing?

Netflix Is Making Both Cable and Internet Television Better (The Atlantic Wire)
The Atlantic Wire argues that Netflix”s recent slew of acquisitions and original series isn”t something that the television industry should fear, since it leads to higher quality programming and has helped change the way television gets made.

The future of television (U Weekly)
U Weekly talks about recent issues in the television industry, including the changing face of media consumption, the impact of streaming services on viewing habits, and the burden of anticipation and commercials.

5 Great International Shows That Should Be Streaming (Vulture)
Vulture rounds up five international shows that, while not available for streaming in the United States, should be.

Live From the Oval Office: A Backdrop of History Fades From TV (New York Times)
The New York Times looks at the recent drop in the number of presidential addresses from inside the Oval Office and why the venue has been used as sparingly as it has been during the past decade.