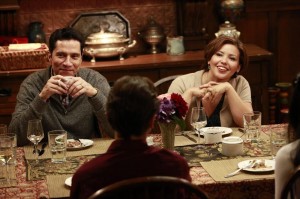 Thus far on The Fosters, Lena and Stef have been left in the dark for quite a bit of the goings-on of their childrens’ lives, from Mariana’s meetings with her birth mother to Callie’s past with Wyatt to the full extent of what happened with Jesus and Lexi. While they like to encourage an open and honest dialogue with the kids, the fact remains that kids and kids and they’re not going to disclose everything that they think or feel, for fear of punishment or judgment. However, their failure to take advantage of Lena and Stef’s open-minded approach to parenting and nonjudgmental attitudes might lead to family tragedy on The Fosters. Which member of the family is seemingly most in danger?

Monday, July 15th – “The Fallout”
Feeling betrayed and angry, Jesus and Mariana get into a major fight. When Lexi’s parents take measures to keep her away from Jesus, Lexi makes a desperate decision, which could have serious and lasting consequences for her and her family. Meanwhile, Lena urges Callie to participate during her weekly group therapy sessions. Callie is conflicted but she opens up to Brandon, who supports her as she confronts a painful memory from her past. Jude hopes to impress his new friend Connor, who comes over to work on a school project.

Monday, July 22nd – “Clean”
A visit from Lena’s beautiful and sophisticated ex-girlfriend reveals a secret yearning Lena has hidden from Stef for the past ten years. Meanwhile, Brandon struggles to please his demanding new piano teacher and rebuffs an offer from Talya to reconnect. When an embarrassing video of Talya circulates around the school, Callie lends her support and urges Brandon cut her some slack. Mike’s drinking and Stef’s mounting concern do not go unnoticed at the precinct. Mariana and Jesus go to tell Ana to leave Mariana alone. The encounter with his birth mom and her desperate situation drive Jesus to take matters into his own hands, a move that could have dire consequences for the whole family.

Monday, July 29th – “Vigil”
While Lena tries to process the extent of Mariana and Jesus’ lies, Stef and Mike head to Ana’s to try and find Jesus. What they encounter lands someone in the hospital and changes the Foster family forever. While the family waits anxiously for news, tensions rise over the secrets the kids kept from Stef and Lena and even Brandon realizes he’s to blame for covering for the twins. Callie has a heart-to-heart with Brandon to help him understand the perspective of a foster child and Brandon learns how Callie’s mother died. Wyatt calls Callie on her  growing bond with Brandon but Callie is all too familiar with the damage that  could result from this kind of relationship.

Who do you think will end up in the hospital? Will talking about her mother with Brandon bring Callie closer to him? What will happen to Jesus when he goes to Ana’s?