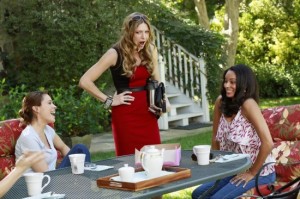 Rather than helping herself or her marriage, Savi has only made things more complicated with how she’s handled the aftermath of her night with Dom on Mistresses. Telling Harry about her indiscretion did speak to her guilty conscience and how truly remorseful she was over what happened, but not only did she tell him very early, she didn’t consider that she’s had quite a while to process her actions. Harry, though, was blindsided and thus doesn’t know how he feels or where their marriage is going, especially not with Savi breathing down his neck about fixing things. Before he’s able to agree to couples therapy, a new job, or any of the salves that she comes up with, he’s going to have to come to terms with what happens and like it or not, that’ll take some time.

On the next episode of Mistresses, Harry and Dom get into a confrontation at a societal event that ends with punches being thrown and the two being separated. While Harry hasn’t been able to straighten his mind out since learning that Savi cheated, Dom was given a blind side of his own when Savi lied about the baby not being his after continuing to refuse to engage with him about what happened. He’s not had a chance to work through his feelings for her or the arrangement of how they’ll feasibly interact with one another, not when Savi walks away every time he mentions their fling; thus, the built up tension that gets released during the fight. Now that two of the men in her life have come to blows after getting their hearts broken by her, what will Savi do in order to repair the situation that resulted from her impulsive office tryst? Is it too late for her and Harry to work things out?

Elsewhere on Mistresses, Joss moves in with April after the fight with Savi, while Anthony pays Karen a visit unrelated to the investigation and April continues to have trouble in letting Paul go.

Mistresses airs Mondays at 10:00 on ABC. The full season is currently available on WatchABC.com and the Watch ABC app.

Is Joss right in being so upset with Savi’s deception? Should Karen go along with Anthony’s advances, if only for the possibility of getting him off her back regarding Thomas Grey? Will April ever be able to get over the loss of Paul and fully invest in her relationship with Richard?