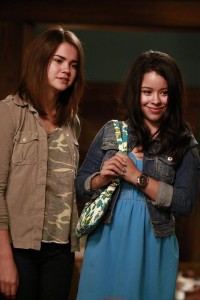 Even though she continues to search for the connection with her mother that she hasn’t had before, Mariana’s time with Ana has yet to produce the desired results. By giving her money and talking with her, even with what happened to Jesus over the pills, the 15-year-old thinks that she’s buying herself time with the women who gave her life and inching closer to understanding where she came from and who she truly is. It’s understandable that someone so young and in such an impressionable, emotionally confusing time of their lives would reach out like this, but Mariana needs to be careful about keeping her expectations realistic and her mother honest; while they won’t become best friends over night, things won’t be expedited if she continues to pour money into Ana’s pockets without learning information about her past.

On the next episode of The Fosters, Mariana is still spending time with Ana, who has admitted that she has a drug problem and needs the money for rehab. When her daughter responds that she doesn’t have anymore money, wary after putting herself out there by selling the pills, she responds by guilting her and suggesting that she steal something from her mothers to sell. Mariana would do anything to foster a relationship with Ana and get in touch with the Latin roots that she’s barely scratched the surface on, but this might be something too far out of her comfort zone, the idea of hurting the two women who have made her feel like their biological daughter and to whom she greatly looks up. Especially considering the fact that Ana’s only made very small gestures (e.g. the teddy bear from last week) and hasn’t seemed interested in getting to know the daughter that she left behind all those years ago. But will Mariana agree to her demands, lest she lose the last chance to get to know her birth mother?

Elsewhere on The Fosters, Callie opens up to Brandon about a painful part of her past, while Jude has Connor over to work on a school project and Jesus threatens to tell Lena and Stef about Mariana and Ana.

Will Mariana continue to give her birth mother money after being guilted about it? Is group therapy ultimately going to be a good thing for Callie? How will Jude’s time with Connor go?