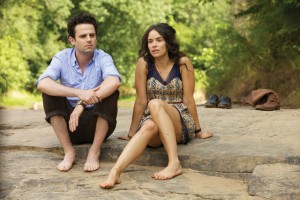 AMC will be running a Rectify marathon on Sunday, July 14th, beginning at 9:00 a.m. The Sundance drama, starring Aden Young (Killer Elite) and created by Ray McKinnon (Sons of Anarchy), debuted to strong reviews earlier this year and has since been renewed for a second season. The move should help expose the series to new eyes and boost viewership to match word-of-mouth for the Critics’ Choice Television Award nominee, which wouldn’t be too out of place amid AMC’s quieter dramas (Mad Men, The Killing).

Listed below are the times, titles, and descriptions for the six-episode first season of Rectify.

9:00 a.m. – “Always There”
After 19 years on death row, Daniel Holden is released due to new DNA evidence.  He returns with his family to his childhood home, struggling to adjust to life on the outside. Meanwhile, the Senator who prosecuted him plots to reopen the case.

10:00 a.m. – “Sexual Peeling”
While Daniel explores town on his own, Amantha worries for his safety. Ted Jr.  fears for the future of the family business. And Senator Foulkes learns some valuable gossip from his secret lover. Unease and tension pervade Daniel’s welcome home party.

11:00 a.m. – “Modern Times”
Daniel retreats from the stress of recent events as his return opens old wounds. Tawney reaches out to him, unbeknownst to her husband. Jon confronts Daniel’s original defense lawyer. And Amantha fears the town’s anger may erupt any moment.

12:00 p.m. – “Plato’s Cave”
Janet’s day in town with Daniel becomes a media spectacle. Back on the case, Sheriff Daggett questions Trey Willis about a missing witness. Daniel and Tawney connect in unexpected ways.

1:00 p.m. – “Drip, Drip”
Daniel loses his grip on reality as he wrestles with life after death row.  Following a surreal night with a mysterious stranger, he finds himself at odds  with Ted Jr. – who questions Daniel’s innocence.

A 10-episode second season of Rectify is set to premiere next spring.

Will you be watching the Rectify marathon? Do you think this will help viewership and word-of-mouth for the critically-acclaimed drama? Should more sister networks do this type of cross promotion to help one another?