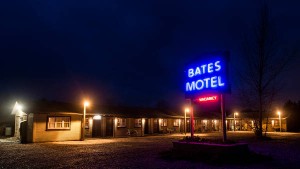 Even though Norma won’t have to worry about Deputy Shelby or Jake Abernathy getting near her or Norman next season on Bates Motel, it looks like the two will have visitors coming next season.

According to TVLine, the drama will be seeing three new additions for its second season: George, a divorced man in his 40s who takes a romantic interest in Norma; Christine, a socialite in her late 30s who becomes Norma’s first friend in her new town; and Caleb, Norma’s estranged brother who is looking for his sister’s help in getting his business off the ground. There’s been no mention of whether Caleb is the brother that Norma was forced to have sex with or where their relationship stood before she made the move to Oregon, so his presence in White Pine Bay could either be awkward or really awkward, depending on the answers to those two questions; hopefully Norma’s other two connections will balance any of the harm that Caleb being in town will do, since she’s been very lonely after moving to White Pine Bay and needs the companionship that George and Christine could provide. Casting for each role should be announced in the coming weeks/months.

Having all three of the new character connected to Norma makes sense, as Vera Farmiga’s performance has been the most well-received part of Bates Motel, garnering nominations at the Critics’ Choice Television Awards and the TCA Awards, respectively. She’s been in the conversation for Emmy attention, as well, but nominations will not be coming out until July 18th.

The second season of Bates Motel begins production later this month for a 2014 debut. You can check out a recap of the first season finale here.

Do you have any casting suggestions the three new characters on Bates Motel? What are you expecting from the next season of the show? How far will Norman’s sanity slip during the next set of episodes?