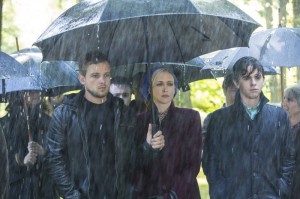 The morning after the dance, Norma receives an automated call from the school principal, stating that Miss Watson had been found dead the previous night, that an investigation into the crime was ongoing, and that there would be no school Monday due to the memorial service. When Norman comes down from his room, she asks him again what happened last night and he nervously tells her that he doesn’t remember, his only memories of the night being asking the teacher for a ride and running home afterward. However, at the rainy memorial service, Norman cannot retain his composure and openly sobs while the priest delivers the final words for Miss Watson, causing Norma to comfort him.

At home, Norman stares out the window and laments that Miss Watson was so kind to him. Norma tries to tell him that he only knew one side of his teacher and that there was no telling what her life away from school looked like, yet when she leaves the room, Norman produces the pearl necklace that Miss Watson was wearing at the time of her murder. Elsewhere, a drunken Bradley nearly runs her car into a truck before stopping on the town bridge and jumping off into the water below.

Business is booming at Bates Motel, as the summer season has brought more traffic down the main highway and caused the motel to be sold out. However, while Emma is still working at the front desk, Norman is busy with his taxidermy hobby, this time working on a beaver. It’s the most sophisticated animal he had ever attempted to do by himself, but Norma doesn’t care; she wants him out working the front desk and doing things that she deems to be normal. When he goes out to the desk, he receives the bundle of letters he wrote to Bradley at the mental institution, all returned to sender, and learns that she’s getting out today following her suicide attempt. While a dead-eyed Bradley is sent home to her mother, Dylan attempts to pay Norma rent, though she rejects it knowing where it came from. He argues that the entire town is built on the weed business before leaving the money with her.

Norma takes Norman driving and becomes the prototypical backseat driver, getting in his ear about being too much on one side of the road and mentioning the possibility of them veering into a tree. Already stressed enough, Norman takes a detour into Shepard’s View Cemetery so that he could continue the process of saying goodbye to Miss Watson. Norma chastises her son again for being abnormal and unable to let go of someone who wasn’t especially close to him and instead of visiting the grave, Norman makes his mother drive them home. The two run upon construction of the bypass, which Norma learns is officially beginning on Monday despite the assurances she received that it would be delayed.

That night, Norma signs herself up to speak at the following day’s city council meeting and reminisces with Norman about the first time they got to flip on the No Vacancy sign and how they want to keep that feeling for as long as they can. Meanwhile, Bradley goes to Gil’s to ask about what happened to her father and who was responsible for killing him; she’s told that Jerry was a heel who only had it out for himself, a bad thing in White Pine 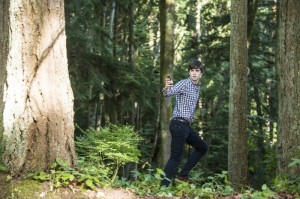 Bay. She returns home and goes through her things, including the letters from mysterious B and a hand gun, before having to entertain Norman, who came to see her after writing her every day she was inside. The reason he came? He wanted to tell her that he thought about how isolating and lonely Bradley’s life must have been for her to attempt suicide and assure her that he would always be there to help her, causing her to cry as he leaves.

The following morning, Norman fondles Miss Watson’s pearls and rereads the newspaper article about her murder. The memories he has of the night that she died motivate him to go to her grave, where he sees Gil mysterious hovering over her stone. He takes a few cell phone pictures before being chased away; when Gil returns to work, he mentions to Dylan that they have to get rid of Bradley, as she’s poking around into what happened to Jerry and he doesn’t want her to uncover something that she doesn’t need to know. Another worker comes up to Dylan after Jerry leaves and mentions how Gil hates Jerry Martin for sleeping with his girlfriend Blair – Blair Watson. Elsewhere, Norman goes to Sheriff Romero with the cell phone photos and the meeting turns into Romero questioning how often Norman visited Watson’s grave and if he had ever been to his teacher’s house. He let him go with the assurance that Miss Watson’s killer will be found.

Norma heads to the city council meeting and squeezes her agenda at the tail end, telling those in attendance about how the bypass would harm her business and how the big box stores would take away the quality of the quaint town. However, the council writes her off as stupid and confused and Lee Berman, head of the council, calls her outburst out of line. She, in turn, calls him a dick, upset that she’s now stuck with a motel that she can’t sell and irritated that the PTA mothers in attendance are more concerned about banned book lists than the quality of life in town. After the meeting, Norma runs into Romero, who tells her about the encounter with Norman and encourages her to push him to simply be a kid. When she heads home, she confronts Norman about his obsession with Miss Watson and he confesses that he did go over to her house that night. He describes what happened with the tea and her changing with the bedroom door open, but he doesn’t remember what happened between that and running home. She tells him that he did the right thing in coming home when Miss Watson tried to seduce him, even though he feels guilty over not being there to protect her.

Bradley goes to Gil’s again and this time, she comes inside. He pours her a drink and she makes it obvious she’s willing to fool around with him, as long as she gets answers to her questions about her father. She gets on top of him, takes her jacket off, and gets an important piece of information before pulling her gun out and shooting him in the head. She then goes to Norman’s in the middle of the night, taking him up on his offer to help her no matter what.

Additional thoughts and observations:
-“This is the road that’s going to ruin our lives.”
-“Yes, I just called you a dick because that’s what you are.”
-“Not easy being a girl without a daddy, y’know?”
-As always with anything TVHackr-related, if you want coverage of Bates Motel to continue, please share the link to this recap on your social media sites, with your friends, etc. I might like talking about any and every show that I watch, but a recap that falls in a forest doesn’t make a sound. Or something.
-I didn’t care for how the episode was structured. The “X months later” device is so lazy and robbed us of psychologically interesting material, e.g. how Norman dealt with the immediate aftermath of Watson’s death, etc.
-Although Bradley’s drunk driving scene was painfully cliché, pretty much everything else they gave her to do was actually pretty strong. The shots of her jumping from the bridge, her body falling through the water, and her walking the hallways of the institution were powerful in their own way, while she feels more integrated into the show than she did for the majority of season one. I hope that the shooting provides her with the type of material that we didn’t get from Norman following Miss Watson’s death.
-Norma looked very Sarah-Jessica-Parker-circa-Sex-and-the-City-season-5 with her new haircut, especially when she was on her bed planning for the council meeting. I like it, though.
-Very little Emma, which was interesting. Since she and Norman are so distant, it makes sense that she wouldn’t be all over the premiere, but I’m curious how their falling out at the end of season one will impact season two, especially since she was such an important part of Norman’s life last season.
-Another gorgeous shot: the semi-overhead of Miss Watson’s memorial, all black umbrellas and rain. Coincidentally, the rain when Norman got home wasn’t my favorite thing, just because it looked like the film was damaged vs. anything realistically resembling rain.
-As much as I would like the show to embrace what makes Norman Bates the iconic character that he is, I think it would be a nifty twist if it turns out that Gil did, in fact, kill Miss Watson and that Norman has been torturing himself over nothing. We’ve seen already that he doesn’t have the most reliable memory and while it looks as if he killed Watson with the pearl necklace, which he’s keeping as something of a trophy, there’s always a chance he snagged it on the way out when he left the house.
-Every television episode needs to have Vera Farmiga calling somebody a dick. Every single one of them. Bates Motel, Modern Family, Sesame Street – just Vera Farmiga walking on screen with a bewildered look on her face to call somebody a dick.
-I also love how she moved over into the driver’s seat at the cemetery. Say what you want about Farmiga’s performance, but she commits 120% and I completely buy this character coming from her. Even at her most outlandish, there’s an earnestness to Farmiga’s performance that keeps everything grounded.
-Norma Bates: world’s worst driving instructor? She put me on edge and I was stationary, so I can only imagine having to operate a motor vehicle with her in your ear.
-Next week on Bates Motel: Norma tries to distract Norman from his obsession with Miss Watson.