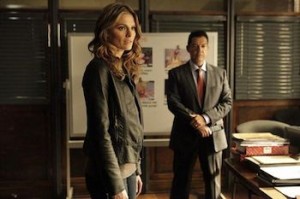 I can’t even speak right now, so bare with me while I write this review. The episode ended 5 minutes ago and I’m totally freaking out. I’ll probably still be freaking out tomorrow morning. What a phenomenal, heart stopping episode. “In the Belly of the Beast” proved that Stana Katic is truly incredible. I always knew she was phenomenal as past episodes have proved, but in this episode she was on a whole new level. The episodes this season just keep on getting better and better.

The intensity factor in this week’s episode was off the charts. I was on the edge of my seat the second Beckett was kidnapped. We all knew things weren’t going to go according to plan, but I never thought the episode was going to go the way it went.

The episode really hinged on Stana’s performance and she killed it in every single way. Stana’s fear looked so real when Harden was scanning her for a wire while she was in the van. I could almost hear her heart racing. Or maybe it was my heart racing a mile a minute? My fear pushed aside, I couldn’t help but smile when we were treated to Beckett’s sexy Russian accent. That wasn’t the only thing from the past we were lucky to get this episode.

I will definitely not repeat what I screamed out loud when it was revealed who Lazarus was or who we thought he was, but I’m sure some of you could guess. Never in a million years did I think  it was going to be Vulcan Simmons. As he kept on talking, I was getting closer and closer to my television till I realized who it was. The last time we saw Vulcan Simmons, Beckett was slamming him into the mirror in the interrogation room at the precinct and accusing him of murdering her mother. Mind incredibly blown! I’ve said it before and I’ll say it again. The Castle writers are geniuses.

Not only did I freak out a million times this episode, but my heart also broke a ton of times. When Beckett was writing that letter for Castle, my heart was actually hurting. Beckett was such a genius for leaving the blood that would lead to the letter for Castle in case things got bad. As much as things looked like they were going wrong I never once doubted things wouldn’t turn out good for Beckett.

That was until they started water boarding Beckett.  Things turned bad fast but I knew Beckett was strong and would get out of it. It didn’t stop my heart from racing so incredible fast. My hands were on my face the entire time. I just kept on getting flashbacks of Ryan being water boarded.

Beckett was strong and was even threatening Vulcan. I just didn’t know how much of the torture I could take. That scene alone proved that Stana deserves all the awards in the world. I could feel the pain she was going through. This episode will stick with me for a very long time and it’s up there in my favs category.

This was quite the episode for Beckett, but it was also a great one for Castle. I felt so horrible for Castle when he heard about Beckett. He was so helpless in this situation. I just loved that Javier was reassuring him that things were going to be okay. He was right, it was Beckett. Never ever count her out.

“This is Beckett we’re talking about. She might be your fiancée, but she’s also a damn good cop. So don’t sell her short.”

This being Castle, things are always bigger than what they seem. I couldn’t believe it but Elena, the woman Beckett was pretending to be actually saved Beckett in the woods. But why? Well, Lazarus sent Elena to save Beckett. I’ll ask the question again, why? Things were about to start making sense.

Beckett being the incredible detective she is, remembered an account name for the money laundering scheme. Future Forward turned out to be a political Super PAC. Someone higher up was behind this whole thing. Somebody that needed Beckett alive. I was with Beckett, no way was Vulcan Simmons actually Lazarus. I’m sure you all freaked out when you realized Senator Bracken had to be Lazarus.

It all made sense now. Bracken owed Beckett for saving his life and now they are even. The next time they see each other, all bets are off. Now that Senator Bracken is going to run for President, things are going to get extremely interesting! I always wondered how they were going to bring Bracken back into the mix and this way was pure genius.

Other things I loved this episode was Gates telling Beckett she didn’t have to do the undercover assignment and she’d take the heat for it. They’re relationship has really blossomed into something great. Don’t get me wrong, I miss Captain Montgomery so much, but Captain Gates has really turned into such a great character. We need more of Penny Johnson Jerald.

How about when Beckett was told to kill Even Potter?! I really had no idea how Beckett was going to get herself out of that one. Good thing Mr. Potter had a ton of ketchup and beet juice in his house. It was also good that Harden didn’t see Beckett enter the house because those 2 bullet holes in the window wouldn’t have made much sense.

It was short moment, but Beckett giving herself a pep talk in the bathroom mirror was great. “You’re getting out of here alive.” I love that Castle and Beckett’s future is what kept her going.  Beckett isn’t alone anymore. She has someone who loves her so much and she has so much to live for. Character development has always been what I love most about this show. It’s natural, people change, people grow, so why shouldn’t television characters? Kate Beckett has changed so much since the start of this show, it’s amazing. Definitely my favourite character on tv and Stana Katic continuously brings it week after week. I could never picture anyone else in this role but her.

I am always in awe how this show just keeps on getting better and better. This team is truly incredible and I’m enjoying this wild ride they put us on week after week. We have to wait 2 weeks for a new episode but it’s alright, because I’m pretty sure I’ll still be freaking out about “The Belly of the Beast” for a while.

This episode definitely belonged to Beckett and so did the best lines.

“What we both need is a good font.”

“If I don’t make it, I need you to know that our partnership. Our relationship is the greatest thing that has ever happened to me. You’re an amazing man, and I love you with all of my heart. Always.”

“The only thing that kept me going was thinking about you.”

What did everyone think of tonight’s episode? Did you freak out as much as I did? Sound off below!