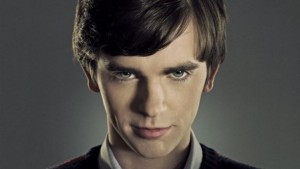 A&E has announced that a Bates Motel live after show will air Monday, March 3rd at 11:00. Titled Bates Motel: After Hours, the half-hour special is set to bring series stars Vera Farmiga, Freddie Highmore, and Max Thieriot, as well as executive producers Carlton Cuse and Kerry Ehrin, together to offer their insights into the second season premiere and answer fan questions about the upcoming season.

The existence of Bates Motel: After Hours follows a recent TV trend where genre shows or cable anomalies try to engage fans beyond the running time of a weekly episode. Currently, there are two other after shows on television in Teen Wolf‘s Wolf Watch and The Walking Dead‘s Talking Dead, but Mob Wives and Breaking Bad had their own after shows in the past, while Sons of Anarchy produced multiple online after shows during its most recent season. In the case of Bates Motel, the after show is being used as additional incentive for people to sample Those Who Kill, an upcoming crime drama that will be premiering Monday, March 3rd at 10:00.

While A&E has had unscripted success with the likes of Duck Dynasty and Storage Wars, Bates Motel is the first breakout scripted series they’ve had, which makes its success all the more important. The network must use Bates in order to launch additional scripted programming and solidify its success, something that will be much easier to do if Bates can launch pretty big and enough people stick around to watch both Those Who Kill and the Bates after show.

The second season of Bates Motel is set to premiere Monday, March 3rd at 9:00 on A&E. You can check out two Bates Motel season two teasers below, as well as a recap of the first season finale here.

Will you be watching Bates Motel: After Hours? Would you like to see more after shows/fan events in the vein of After Hours? What do you expect to happen during the second season of Bates Motel?