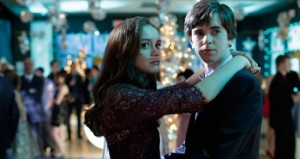 Norma bursts into the sheriff’s office demanding to speak to Romero about the threat from Jake that’s still looming. He assures her that no harm is coming her way and that he’ll take care of it, although that does nothing to soothe her troubled mind. So much so that she tries to butter Dylan up before asking him to get her a gun a teach her to shoot. Being that he doesn’t trust Norma whatsoever, he rejects her request, even when she mentions that it’s to defend herself.

That afternoon, Norma drops off her dry cleaning and makes a stop at the office of Dr. Kurata, the therapist she took Norman to last week. Once there, she gets him to take her in during an empty appointment slot in hopes of figuring out how to manage and cope with the immense amount of stress in her life. Instead, he steers the conversation to Norman, Norma’s reaction to him growing up, and how she views the concept of parenting. Norma’s evasive when her childhood is brought up, aside from revealing that her father was always smiling and her mother smelled of cookies, and suddenly has a stomach ache that tears her away from the appointment.

Meanwhile, Romero goes to the home of Maggie Summers, Keith’s sister and the one responsible for the bookkeeping of the operation he ran with Jake and Zack. It turns out, though, that Jake (whose real name is Joe Fioretti) had already been by to see Maggie regarding the money and roughed her up when she didn’t have it. Eventually, he leaves her alone, letting ti slip that he has the same operation going on at four different coastal ports.

Dylan comes by the motel with a gun wrapped in a brown paper bag, warning Norma not to make him regret agreeing to get her the gun. He takes his mother out to an open field where he lines up empty bottles and tries to teach her proper shooting technique. She messes up the first time when she goes too early before nailing it the second time; she even gets him to call her “mom” on an accident. However, that joy is short-lived when she finds out what he’s been doing that requires carrying a gun.

Later, Maggie stops by to warn Norma about Jake, dropping even more tension on the motel owner’s shoulders as midnight speeds closer into view. Norman, meanwhile, gets his hopes up when Bradley comes ringing the doorbell, only to want to talk to Dylan. He gives her the stuff from her dad’s office and the two have a quick, pleasant conversation before she leaves. Norman overhears everything that they say and works himself up into a bit of a frenzy, confronting his brother over his former crush.

The time is now 7:30 p.m. and Norma decides to come clean with Norman about something she never told him. She was molested by her brother from the age of 13 until he moved out of the house. Their family was broke, her mother had already checked out by that time, and her father was a violent, violent man, though the scar on her leg was from an accident she had when he caught her and her brother together. Norma jumped up quickly and knocked a hot iron onto her thigh, which left the mark that still stands today.

Once she gets Norman off to the dance and receives a menacing call from Jake/Joe, Norma loads a bag to make it look flush with cash and places her gun right where she can get it. With her head wrapped in a scarf, Norma arrives at the docks and hides when she sees a car coming. However, it turns out to be Sheriff Romeo, lugging a duffle bag full of money that he got from Shelby’s garage earlier that day. Jake/Joe shows up right after Romero arrives and while the Sheriff lays down the lay about how business is done in White Pine Bay, everything being ran through him, Norma gets her gun out and prepares to shoot. Who? At this point, she doesn’t care.

Romero ends up shooting Jake/Joe, whose body falls into the water below. He tosses the money in, too, and tells Norma to come out of hiding and that when he says to trust him, she should trust him.

Dance, Dance
Norman asks Emma to go to the winter formal that same night and she says yes. Not long after, Norman overhears Miss Watson having an argument on the phone with a man named Eric; he promises not to tell anyone anything that he heard and she seems okay with that, as they’ll now have a secret to share. She touches his face gently and gives him a tearful hug of appreciation.

At the motel, Emma shows Norma her dress for the night’s dance – a lace-y purple number that she’s excited about being able to wear. Norma’s very surprised about Norman agreeing to take her to the dance, but she’s ultimately supportive and thrilled for Emma to be as happy as she is. However, after she tells Norman about being molested right before he’s to leave, she all but sabotages his time with Emma.

The winter formal is Norman and Emma’s first dance ever – a glowing sea of white fabric, clear Christmas lights, and fake snow. From the time that they arrive, Norman can’t quite looking at Bradley and her date, to the point where Emma ditches him and Bradley’s date takes him outside to punch him in the eye. Bloodied, Norman begins walking home alone in the rain, only for Miss Watson to drive by and offer him a ride.

She takes him to her home and begins cleaning his eye after bringing him some tea. Miss Watson reminds him not to tell anyone that he came there that night and moves his hair just a bit when she finishes wiping his face up. When she goes to change before driving him home, leaving the door open and herself available to be seen, Norman has a vision of his mother in the room with him. Norma tells him that he “knows what he has to do” and the next thing he knows, he’s running down the road in the rain. Norman makes it home and hugs his mother, the two deciding to go make a fire now that their troubles are over and the night is nearly finished.

As for Miss Watson?

Norman left her with a sliced throat, dead on her bedroom floor. He had killed her during the time that he couldn’t remember anything.

Additional thoughts and observations:
-It’s interesting that this episode was exponentially less crazy than the previews made it seem. I appreciated both Dylan and Norma being made into more vulnerable characters, as well as Emma finally standing up for herself after Norman again treated her poorly, but the pacing was decidedly different than what I was anticipating.
-As for Miss Watson’s death, I figured that someone would die during the finale – I just assumed it would be Bradley, especially after Dylan and Norman had their argument in the bedroom. Props for subverting the “sexy teacher seduces a student” trope, though.
-So how will a second season of this show look? Norman is going to continue spiraling into his own psychosis and there’s the matter of Miss Watson’s death to take care of, but after that, where does it go? Very intriguing to think about.
-Finally, Vera Farmiga for every award ever. The end.
-Thank you guys for reading my Bates Motel coverage this season. I wasn’t sure what I was getting into when I picked it up earlier this season, but I’ve enjoyed writing and thinking about the complex psychology and unusual plotting of a show like this. I hope that we see one another next year when season two picks up.