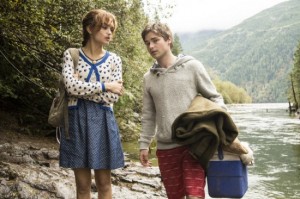 A&E has announced that Bates Motel has been renewed for a 10-episode third season, which will begin production later this year for a 2015 premiere.

“The incredible writing team and talented Bates Motel cast has made this series one of the most compelling original dramas on television,” said David McKillop, Executive Vice President and General Manager, A&E Network. “The brilliant twists and turns of the past two seasons keep its loyal fan base coming back for more. We are so proud of the show.”

The network’s highest rated drama of all time, Bates Motel tells the story of Norma (Emmy nominee Vera Farmiga) and Norman Bates (Freddie Highmore), who move to the small town of White Pine Bay where they open up a motel. The series gives an intimate view at Norman’s unraveling psyche and the impact that his inappropriately close relationship with his mother has on his life. In addition to Farmiga and Highmore, Bates Motel stars Max Thieriot (My Soul to Take), Olivia Cooke (Blackout), Nicola Peltz (The Last Airbender), and Nelson Carbonell (Lost).

Have you been watching Bates Motel this season? Are you excited at the prospect of watching Norman further descend into the man he would become? What do you hope to see from the third season of the show?