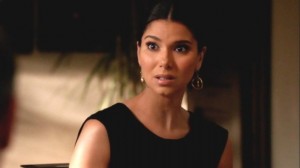 All Carmen Luna ever wanted was to be a star. She wanted to have her musical talents validated and lauded by an adoring public, her face up on billboards and dorm room walls; she wanted the positive reinforcement that she failed to get from her family and her first husband. While she might not have found a way to conquer the music industry just yet, Carmen has proven that she’s willing to do what it takes to make her dream come true, whether it’s becoming a maid when she’s the last person suited for the job or agreeing to act as Alejandro’s beard and using their relationship as a stepping stone to greater things. But will she be happy being stuck in a relationship built not on love but on mutual gain?

On the second season premiere of Devious Maids, Carmen and Alejandro arrive at their latest red carpet, the perfect opportunity to flash a few smiles and put rumors of Alejandro’s sexuality further in the rear view mirror. However, just as they’re about to step out, Carmen tells him that she’s not happy with their arrangement; specifically, she doesn’t like that Odessa doesn’t wait on her like she does on Alejandro. Although that’s obviously an unreasonable demand, seeing as how this relationship is only for show and they only need to give the illusion that they’re together, Alejandro is forced to go along with it because of how important Carmen is to his career and his future in the music industry. If she’s not happy and willing to go along with the terms of their agreement, he’s got a problem, so until their contract runs out, Odessa is going to have that much extra work to do on her own.

Elsewhere on Devious Maids, Zoila finds out Valentina has returned from Africa, while Marisol engages in a romance with a mysterious man, Peri does what she can to keep Spence and Rosie apart, and Adrian and Evelyn hire a handsome bodyguard.

The second season of Devious Maids premieres Sunday, April 20th at 10:00 on Lifetime. You can check out a recap of the first season finale here.

Do you think either Carmen or Alejandro will ever be happy with their arrangement? How will Zoila handle the news of Valentina’s return from Africa? Will the Powell’s new bodyguard come between them?