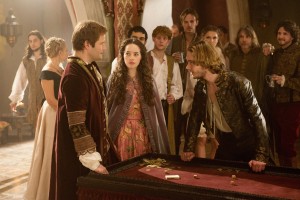 When Mary opted to make a claim on the English throne only if she could marry Bash, Francis had a decision to make. He could have moped over the girl that he loves and the opportunity he lost to become the next ruler of France or he could use the newfound freedom he had to sow his wild oats, doing everything that he never had the chance to do while under the watchful eye of his father. As much as he wants to be with Mary and to have the crown planted firmly on his head, Francis missed out on a lot by being raised with the intention of becoming king and he never had the chance to truly live for himself; his entire life thus far has been geared toward the betterment of some hypothetical citizens of France that he could one day rule and now he doesn’t have to worry about fitting some standard of what French royalty should act like. Now he can simply be himself and, more importantly, figure out who he is away from his royal obligations.

Thursday, March 6th – “The Consummation”
With a forced marriage looming, Mary must consider both her heart and her nation when deciding whom she will wed – Francis or Bash – when Francis returns to court with Lola at his side. Further complicating matters is Mary’s mother, Marie de Guise (guest star Amy Brenneman), who visits the castle with her own agenda for Mary. Marie’s presence worries King Henry and Queen Catherine, who have their own plan for the future of France, regardless of who gets hurt in the process.

Thursday, March 13th – “Dirty Laundry”
Mary returns from her honeymoon and, suspicious of Lola’s strange behavior, uncovers a deception that changes everything. Bash encounters a confused and terrified Olivia (guest star Yael Grobglas), an escaped victim of the terrors of the woods, which causes him to enlist Nostradamus (Rossif Sutherland) for help. Meanwhile, when King Henry’s odd behavior causes misfortune, he is forced to ask for Queen Catherine’s aid.