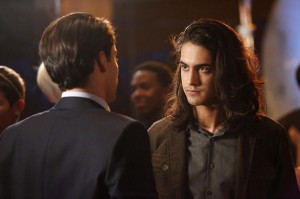 For all the mysteries currently floating around Green Grove, perhaps the most intriguing is who exactly Charlie is and why he came to town in the first place. We’ve seen that he’s someone who keeps unusually close tabs on Lacey and seems a bit too interested in Danny’s past, but there’s been no indication of the reasoning behind his suspicious behavior, whether he might have any involvement in Regina’s death or know someone in town from a past life. What has been evident from the beginning on Twisted, though, is that no one in Green Grove can be fully trusted, meaning that there’s a chance that Charlie’s ulterior motives for being in town could be a bad thing for Danny, Lacey, and/or Jo.

On the next episode of Twisted, it’s revealed that Danny and Charlie know each other from the past, as the two bunked together in juvenile hall. Since Danny would go on about his former life, including his friends, Charlie thought that when he was released, Green Grove deserved to be checked out, even though Danny isn’t exactly welcoming him with open arms. In fact, Danny wants nothing more to do with that aspect of his life, not after what happened with Vik in the woods, but he’s going to have a tough time moving on when a living, breathing embodiment of the five years he wasted in juvenile hall is parading around town. Danny’s already having enough trouble dealing with his father’s death, but could Charlie be more actively threatening than a simple reminder of a time he would like to forget?

Elsewhere on Twisted, Jo tries to set Rico up with a girl who expresses interest in him, while Jack moves in on a conflicted Karen and Tess finds keeping what she knows about Vikram from Kyle more difficult.

Do you think that Charlie poses any danger to Lacey? Will Rico be able to get over his feelings for Jo and move on to someone who could treat him right? How much more does Jack know that he isn’t letting Karen in on?