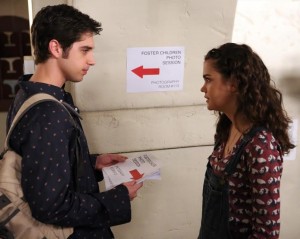 Brandon’s decision-making hasn’t exactly been the best during the winter season of The Fosters, as he put his relationship with Callie above her emotional well-being, took money from his father under false pretenses, and caused a scene at a party when he ran into Talia, among many other gaffes that have taken place over the last six episodes. Once the calm, sensitive core of the Foster family, he became arguably the family’s biggest problem area, which extended to his decision to get into the world of fake ID making. Granted, the only reason he’s doing what he’s doing is to pay his father back and replace the money he took without Mike noticing, but given how everything else has gone for him this season, there’s a strong possibility that this will blow up in his face.

On the next episode of The Fosters, Brandon soon finds himself in over his head when he enters into the world of fake ID making. Not only is he doing something that he never thought he would have to do, and associating with people who he doesn’t exactly have anything in common with, he’s in the tough position where he’s damned if he reaches out for help and damned if he tries to pull himself out of this mess. If he goes to his mothers for help, he’ll have to confess the real reason he took the money and the fact that he lied to Mike, while keeping what’s going on to himself could lead things to go even further off the rails. Brandon might have the best intentions in the world throughout this season, but it seems that something is getting lost from his thoughts to his actions and the time to pay for his series of mistakes might be coming sooner than he wants.

Elsewhere on The Fosters, Callie’s photography skills lead to trouble for someone she cares about, while tensions come to a head between Jesus and Emma, Mariana deals with the fallout from her night with Chase, and Lena and Stef contemplate the possibility of their family taking another big step.

How far will Brandon let the fake ID business go before reaching out for help? What will Mariana have to deal with from her classmates after coming on to Chase at the party? Should Lena and Stef try to halt the next big step their family seems poised to take, considering all that they’ve been through recently?