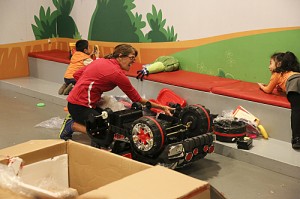 CBS has announced that the first two episodes of The Amazing Race: All-Stars, the 24th season of the eight-time Emmy winner, will be reaired Saturday, March 8th beginning at 8:00. The show had the bad luck to air the first two episodes of its third all-star season against the closing ceremony of the Sochi Winter Olympics and the 2014 Academy Awards, so this is a way for the network to catch people up while keeping the show’s May finale on schedule.

However, The Amazing Race took a noticeable hit in the ratings for its most recent season and there’s always the possibility that at least part of the hole All-Stars is in has nothing to do with the Olympics or Oscars. Some of it could be natural aging that every show, even the most resilient, is forced to deal with at some point, while there’s a chance that the show hit a casting bump for season 24 and won’t be able to reverse course until the fall season. The Amazing Race has been going to the well for returnee teams quite often in recent years, something that should be a guaranteed boon for ratings given viewer recognition and familiarity; however, part of the fun of the show is watching people experience the highs and lows of the race for the first time and by the third time you see a team, some of the enthusiasm about the show can dissipate, especially if said returnee teams either have no chemistry with one another or weren’t that memorable/great in the first place.

The Amazing Race airs Sundays at 8:00 on CBS. The show had been on an island of sorts, airing its first two episodes without any other new product on the network, but the coming third episode will see a lineup featuring new episodes of The Good Wife and The Mentalist.

Have you been watching The Amazing Race this season? Do you think the lower ratings have anything to do with casting decisions? How would you like the show to spice things up with its next regular season?