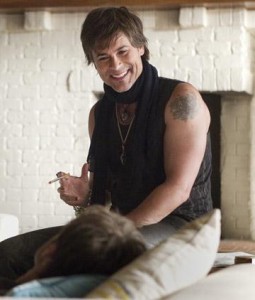 Showtime has announced that Rob Lowe will be reprising his role as out-of-control actor Eddie Nero for one episode on the next season of Californication. He comes crashing back into Hank’s orbit when he lands a guest spot on the television adaptation of Santa Monica Cop, the movie Hank was working on last season that turned into a major success. Among the other characters that Hank will deal with upon joining the writer’s room are old school television producer Rick Rath (Michael Imperioli) and aspiring writer peers Goldie (Mary Lynn Rajskub) and Alonzo (Alonzo Bodden).

But that’s not all, as Hank’s personal life has begun to unravel once again. Last season ended with him eschewing a life on the road with Faith for another shot at being with Karen, but that attempt at domestic bliss might not survive the arrival of Julia (Heather Graham), a former friend who threatens to tear down everything Hank and Karen have built recently. Charlie and Marcy, meanwhile, are still together after reuniting in the sixth season finale, only now they’re facing an offer from Stu that could change everything.

This will be Lowe’s sixth episode portraying Nero, dating back to 2011’s “Suicide Solution” and including this year’s “Mad Dogs and Englishmen”, where Eddie partied with Hank at Atticus’s drug-fueled soiree and took a shine to Karen. He currently stars on NBC’s Parks and Recreation as small-town bureaucrat Chris Traeger, having previously been a regular on the likes of The West Wing, Brothers & Sisters, and The Lyon’s Den.

The seventh season of Californication, which will also feature guest appearances from the likes of Brandon T. Jackson and Mercedes Masohn, is currently shooting in Los Angeles and will debut in January 2014 on Showtime.

Will you be watching Californication next season? How do you think Hank will handle Eddie Nero being on his show? Is there a chance that Hank manages to keep things together with Karen and adapt well to working in television? 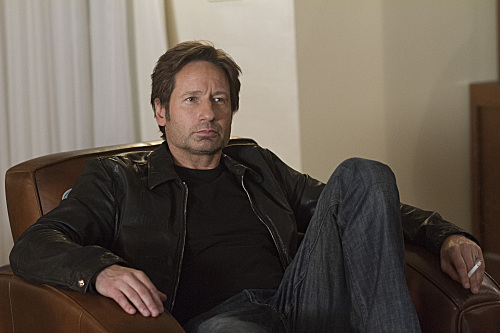