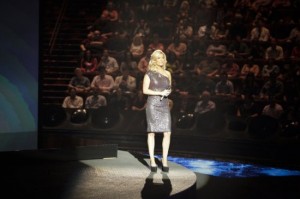 Syfy has revealed details for the upcoming season of hit reality-competition series Face Off, which crowned its fourth champion earlier this year. While the judges (Glenn Hetrick, Ve Neill, Neville Page), host (McKenzie Westmore), and mentor (Michael Westmore) will remain the same, the show will throw a monkey wrench in its usual formula by bringing back eight former contestants to compete against eight newcomers. Returning for another shot at glory and the prize package, which includes $100,000, a 2013 Fiat, and a VIP trip from Kryolan Professional Make-Up to one of their 85 international locations, are Tate (season 1), Frank (season 1), Miranda (season 2), RJ (season 2), Alana (season 3), Laura (season 3), Roy (season 3), and Eric Z. (season 4).

The finale brings the final three to the ballet, as they’ll be tasked with creating two unique looks that will be put to the test in a performance of Swan Lake by the Los Angeles Ballet. Cast bios are available on Syfy’s website.

Although the show gets credit for attempting a “special” season to break up what could have been another routine competition, I’m not sure that having a season with this structure is the best idea. The eight former contestants have a distinct advantage in knowing what the judges respond to, being acclimated to time on camera, and little tricks of the trade they picked up during their original time on the show, especially since half of them finished in the top 4 of their respective season. While the newcomers won’t have as much pressure to perform as the veterans, who face potential embarrassment in losing to those with less experience in make-up and television than they have, I feel as if the show should have either put on a full All-Star competition or sought out contestants either with great potential or who flamed out early. The prior could have been a showcase for the best and the brightest the competition has produced thus far, really showing why this is one of the best reality shows on television, while the latter is as fair as you can get with this type of format, allowing the contestants to be on fairly equal footing to begin the competition.

With the format that season five will have, though, you can already eliminate half of the contestants from contention before the first episode airs. What would make things interesting, and the format worthwhile, is if the veterans collectively stumble out of the gate and more than one of the newcomers manages to acclimate well to the pace of Face Off. This would even out the odds quite a bit – and make the show more entertaining in the process.

The fifth season of Face Off is set to premiere Tuesday, August 13th at 9:00 on Syfy.

Will you be watching Face Off next season? What do you think about the return of eight contestants? Did the show choose the right veterans to compete for another shot at the title?