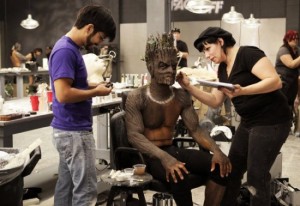 Hit reality-competition series Face Off has officially been renewed for a fifth season by Syfy. Pitting the best in the field of SFX make-up artists against one another for top prizes, the show will air its fourth season finale on March 26th and return sometime this summer. There’s no word yet on a concrete premiere date for or any details about the fifth season.

In the season four finale, the top three are tasked with creating waterproof makeups for Le Reve: The Dream at the Wynn Hotel in Las Vegas. Currently, the show is down to its final four in Anthony, Kris, Wayne, and Eric F., one of whom will be eliminated in tomorrow’s penultimate episode of the season. There, they’ll be creating alien hybrids based off of two of the seven species featured in upcoming Syfy drama Defiance, to be shown off for the show’s director Michael Nankin.

“Face Off continues to prove itself as a ratings hit, earning critical and viewer accolades alike, and we are proud to bring the series back for another stunning season,” said Mark Stern, President of Original Content, Syfy, and Co-Head of Original Content, Universal Cable Productions.

All three judges (Glenn Hetrick, Ve Neill, and Neville Page) will be returning for the fourth season, which begins production in April, while contestant mentor Michael Westmore is also set to return. It will be the Academy Award winner’s second season making the rounds in the workroom and attempting to guide the aspiring artists in a direction that best serves their vision.

Season four of Face Off currently airs Tuesday nights at 9PM ET/PT on Syfy. In its fourth season, Face Off is averaging 1.6 million viewers 18-19 and 2.7 million total viewers in Live +7. You can check out the top 7 power rankings TVHackr did for the show here.

Who do you think is the favorite heading into the homestretch of season four? How do you think the fourth season has been in comparison to the first three? What type of challenges would you like to see this summer in season five?