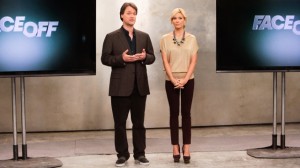 After constructing goblin kings, candy creations, and alien werewolves, the final three on Face Off faced arguably their greatest challenge in crafting waterproof makeups that could withstand the acrobatic routines of aquatic Vegas show Le Reve: The Dream. Only one could take home the position as a guest lecturer at the Make Up For Ever Academies in New York and Paris, 2013 Fiat 500, and $100,000 and that…

was Anthony, who created a harmonious duo of a dream thief in search of a soul and a princess desperate to protect herself. The judges praised him for listening to them about proportions and creating a female who looks realistic while maintaining an alien beauty, while his male makeup carried the sinister theme more clearly and featured intricate sculpting. Though Anthony rattled off four wins in a row to kick off the competition, he hit a rough patch beginning with the insect challenge; he may have won two of the last three pre-final challenges, but you didn’t know if he would show up for the finale once the pressure of the moment kicked in.

Anthony ended up choosing Eric Z. and Autumn to complete his finale team, while Wayne called on Eric F. and Meagan to help create a pair of supernatural creatures and Kris selected Alam and House to aid him in making two celestial makeups. While the judges had a lot of praise for both teams, with Wayne’s sculpting and an inventive horn idea and Kris’s color choices and sleek design earning the most raves, they were undone by a few elements. The judges may have liked how distinct Kris’ makeups were, but they chided him over the disconnectedness of the orange female and the silver male; meanwhile, Wayne’s makeups had strong elements that didn’t translate into full pieces that stood up to Anthony’s.

The fifth season of Face Off kicks off production next month for an August 27th premiere.

Did you agree with the judges’ decision tonight? If not, who do you think should have won? What would you like to see the show do different for season five?