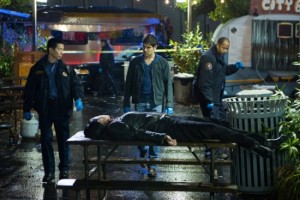 Last week on Grimm, Juliette’s memory began to come back, with the ghostly cloudy following her around the house turning into Nick. Ever since she woke up from the coma that Adalind’s cat put her in, she’s been in the dark about the nature of her relationship with Nick; as much as he may tell her about their times together or how much they loved one another, she can’t remember a second of their interactions, which has helped drive him to Monroe’s home for the time being. However, Nick may want to have his girlfriend back from the brink of insanity, but once she manages to get a better grasp on who he is and the night that she lost her memory, he’ll have a lot of explaining to do. Is he ready to let her in on his being a Grimm? Or will he get cold feet once confronted with the bomb he dropped on her before she lost her memory?

Listed below are the dates, titles, and descriptions of the next two episodes of Grimm.

Friday, April 5th – “One Angry Fuchsbau”
While on jury duty, Rosalee (Bree Turner) tasks Nick, Hank, and Monroe (Silas Weir Mitchell) to help stop a defense attorney from using his particular “Wesen wiles” to overturn what should be an open-and-shut murder case. Back at the precinct, Captain Renard (Sasha Roiz) brings Nick and Hank in on his own recent dealings with the Verrat, to keep them on their toes. Meanwhile, a return to the trailer brings a flurry of memories of Nick rushing back to Juliette.

When do you think Juliette will fully regain her memory? Can Nick and Hank trust Captain Renard? Could the Verrat be planning another attack on Portland?