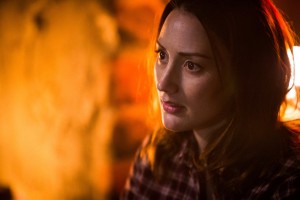 Thus far in its run, Grimm has unearthed a series of creatures hiding in the shadows of Portland. In his two years as Grimm, Detective Nick Burkhardt has had to subdue many different types of Wesen, learning the history of each in order to better understand its motivations, weaknesses, and patterns of behavior. Aunt Marie’s trailer houses supplies that make being a Grimm a little bit easier than it would have been otherwise and provides him with a fountain of knowledge that he utilizes quite regularly. However, there are some things that even the trailer might not prepare him to deal with and coming up on Grimm, there’ll be one of those cases when the undead descend upon Portland.

Listed below are the dates, titles, and descriptions of the final two episodes of Grimm‘s second season.

Tuesday, May 14th – “The Walking Dead”
Nick (David Giuntoli) and Hank (Russell Hornsby) discover a new kind of strange when they investigate suspects being found dead – for the second time. In Europe, Adalind (Claire Coffee) finds herself in the middle of a feud between Frau Pech and Stefania (guest star Shohreh Aghdashloo) while working over the details of her pending transaction. Meanwhile, determined to remember every last detail to get things started once more, Juliette (Bitsie Tulloch) insists Monroe (Silas Weir Mitchell) share with her Nick’s darkest secret – the world of Grimms and Wesen.

Tuesday, May 21st – “Goodnight, Sweet Grimm”
Just when things look like they’re back to normal with Juliette, Nick is called to investigate a flurry of rage-fueled assaults happening all over Portland. He goes to Monroe and Rosalee (Bree Turner) for help battling Portland’s newest wave of “undead.” As if that weren’t enough, Captain Renard (Sasha Roiz) informs Nick that his brother Eric (guest star James Frain) is in town on family business. Meanwhile, Stefania and Frau Pech methodically use their alliances with Adalind to battle one another.

Grimm airs Tuesdays at 10:00 on NBC. The show has already been renewed for a third 22-episode season.

Should Monroe tell Juliette about everything Nick’s been experiencing for the last two years, will she be in more danger than ever before? How will Adalind wriggle her way free of the feud between Stefania and Frau Pech? Will Renard have to face off with his brother once again, only this time on his home turf?