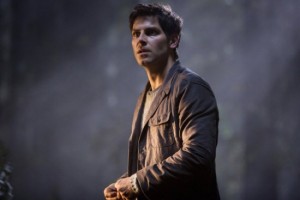 Recently on Grimm, Juliette has been making progress toward getting her memory back and having to face what Nick told her the night she was scratched. Unfortunately for her, the path to wellness hasn’t been easy to traverse, as she’s went from not being able to remember Nick at all to remembering him too much, multiple memories of Nick haunting her when she’s at home. Now’s not the time to turn back, though, not when she’s on the precipice of figuring things out and being able to look at her ex-boyfriend and know who he is and what they’ve been through. Coming up on Grimm, Juliette begins to get her romantic memory of Nick back, but with everything he’s dealing with right now, is Nick going to be able to help her along?

Listed below are the dates, titles, and descriptions of the next three episodes of Grimm.

Friday, April 26th – “Endangered”
Mysterious cow mutilations and reports of glowing creatures put Nick on a case that forces him to question the existence of aliens within the Wesen world. He also meets a strange UFO expert who seems to know more than he’s letting on. Meanwhile, Nick digs further into the key, and Juliette’s romantic memories of Nick start coming back in a big way.

Friday, May 3rd – “Kiss of the Muse”
Nick discovers a muse-like Wesen (guest star Nora Zehetner, “Heroes”) with the ability to influence those she gets close to – some with positive results, others with terrifying ones. Nick must find a way to get close without losing himself in the process. Juliette arranges a dinner date with Nick in the hopes of clearing the air, but their plans go awry as the case intensifies. Meanwhile, Rosalee (Bree Turner) takes her first visit to Aunt Marie’s trailer.

Will we see Nick and Juliette together and back to “normal” (whatever that means in the Grimm-verse) by the end of the season? Do you think that the show should be exploring the possibility of aliens? Is Adalind’s new ally going to be a game-changer for the Hexenbiest?